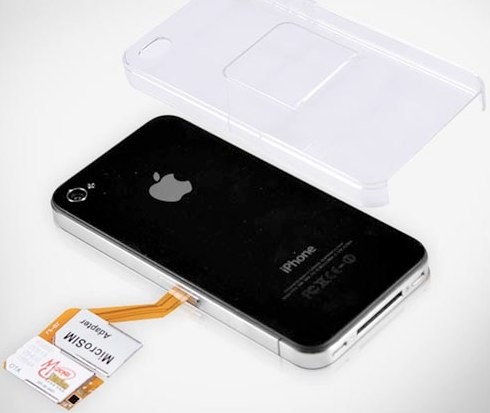 From the same website that brought us the iPhone 5 renderings comes more speculation on Apple’s new iPhone. The site, iDealsChina, is a chinese parts reseller. They don’t have a perfect track record, but they did correctly predict the iPhone 3G and iPod 4G design changes.

Their latest prediction is that the iPhone 5 will hold two SIM cards. They claim it will be for the purpose of supporting dual phone lines, but I’ve got a better guess. The iPhone 5 is rumored to include a Qualcomm Gobi cellular and data chipset. Why does that sound familar?

It’s the same chipset used in the Verizon iPhone 4, which supports both GSM and CDMA connections. What’s so special about this and the possibility of dual lines? Besides the obvious of being able to combine work and personal lines into one device, you could use dual carriers on one iPhone.

Imagine having service with Verizon and AT&T- you’d almost always have coverage. You could use AT&T for the faster data speeds, and switch over to Verizon if the service got spotty. What if the phone switched seamlessly between the 2 carriers based on coverage?

All fantasies aside, these rumors bode well for Verizon customers, whose eligibility for the iPhone 5 is still unknown. It would definitely make sense for Apple to release their next iPhone on multiple carriers, but only time will tell what the Cupertino company has in store.

Does anyone think dual lines sounds like a good idea? Is 4G more important than dual carrier capability?