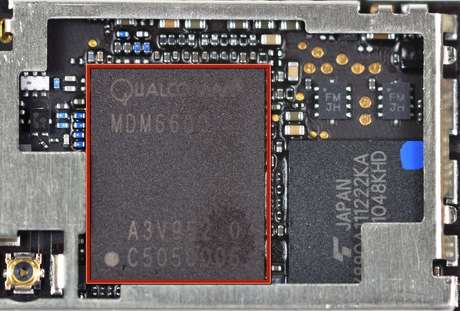 The guys over at iFixit already got their hands on a Verizon iPhone and took it apart to compare its guts to those of the “original” iPhone 4. Most of what they found wasn’t very surprising, but they did make one interesting discovery.

The Verizon iPhone sports a Qualcomm MDM6600 baseband chipset similar to the Droid Pro World Phone’s, which brings support for both CDMA and GSM…

So technically, Apple could have released a dual standard phone working for both AT&T and Verizon (and other supported carriers). So why Apple didn’t do just that?

iFixit speculates that “It may be that it was easier to design antennas for a CDMA-only phone-this phone supports two cellular frequency bands, while Apple supports five bands in the GSM version“.

Will the iPhone 5 get a similar treatment? Chances are it will, which would allow Apple to manufacture only one model instead of 2, thus saving a good chunk of money on production costs.