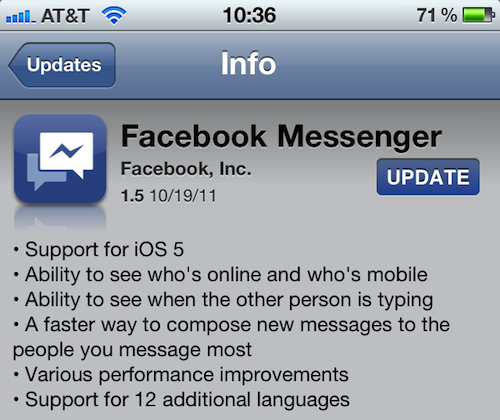 Facebook Messenger has quickly become one of my favorite apps for the iPhone. Before Apple released iOS 5 and iMessage to the public, Facebook Messenger was my client of choice to communicate with my friends scattered around the world.

The problem was that most of my friends overseas couldn’t use the application. It seems that this is not an issue anymore, as Facebook has brought support for 12 additional languages, and is releasing the app in many more countries…

So far, we can confirm that Facebook Messenger is available in France, Germany, Spain, Portugal and Brazil, but it looks like the app is actually available worldwide.

So get your downloading on, and let us know if it’s available in your country.

[Thanks Tito and Roman for the tip]