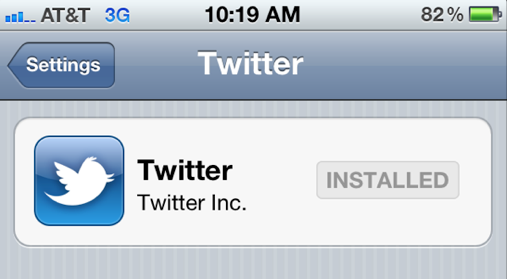 In an interview with Mashable’s Ben Parr, Twitter CEO Dick Costolo shared some interesting statistics. He said that iOS 5 has caused a massive spike in signups for the social network.

According to Costolo, signups via iOS have tripled since iOS 5 was made available to iPhone, iPad and iPod touch users last Wednesday. Add in the hugely successful iPhone 4S launch on Friday, and you have a lot of people plugging their Twitter credentials right into iOS…

Apple took the interesting step of building Twitter right into the heart of iOS 5, with the little blue bird getting its own menu in the Settings app. The idea here is increased security thanks to a centralised login, where iOS knows your username and password, and apps wishing to use your credentials plug directly into the operating system. You don’t have to type your login in over and over, which always helps.

What this also means for Apple is the ability to tie Twitter into their own apps. Want to tweet a photo from your Camera Roll? Now you can, without ever having to launch a Twitter app. Tweeting from inside Maps and Mobile Safari is also currently enabled, and we can only assume other features will come online as time progresses. Siri, perhaps, is the one glaring omission, but we would be surprised if it didn’t receive the Twitter treatment soon.

Twitter itself gets an added bonus as well. Not only does it get its brand in front of every iOS user out there, but it also has its own Twitter app from the App Store pushed to those users as soon as they sign up. While not such good news for third-party developers, Twitter obviously wants users to use its own application, meaning that Twitter keeps control of the experience.

Sounds a bit Apple-like, doesn’t it?

Perhaps the main reason for the influx of new users is the fact Apple has seen such an impressive adoption rate for iOS 5.

New stats released by Localytics show that one in three Apple devices have already been updated to Apple’s latest and greatest mobile operating system. That’s a lot of people using iOS 5 out there.

Localytics does not include the iPhone 4S in its numbers for obvious reasons (the smartphone is still in the process of selling like crazy), but the rest of the iOS devices break down like this: 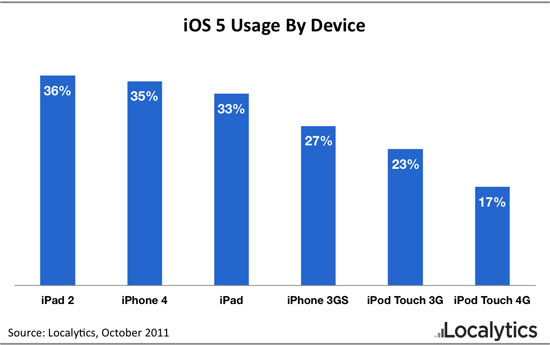 We have to wonder whether these kinds of numbers and Twitter signups will make Facebook think twice about getting in on the iOS 5 action.