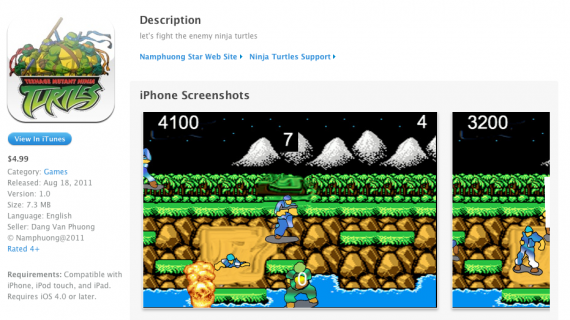 Everyone knows that Apple’s app approval process is one of the most stringent in the business. The Cupertino company has denied software for several different reasons, which has frequently sparked controversy in the iOS community.

But their strict approval methods have insured that its mobile platform has remained safe from malware and other malicious software. However, the process still can’t seem to filter out the scammers…

John Gruber of Daring Fireball points to another sketchy application that has made its way into the App Store. The title of the game is Ninja Turtles, and it seems legit by the familiar TMNT logo. But this game wasn’t made by Konami.

From the Customer Reviews:

“I bought this game for my grandson, he loves the TMNT!! This game has no directions we can’t figure out how to play or even how to restart the game. There aren’t any turtles in the game. A total waste of $5”

The other commenters seem to concur that the game is a scam. Between the app’s misleading description, and the almost certain illegal use of the TMNT brand, how did this title get approved for the App Store. And better yet, how is it still there?