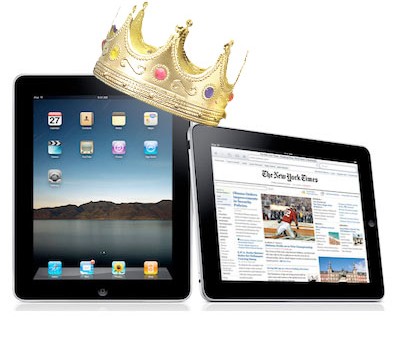 Research firm Gartner issued a special report today that basically concludes that Apple will have a free run at the tablet market this holiday season, just like they did last year, due to competitors lagging far behind.

According to Gartner, the iPad is projected to account for 73.4% of the worldwide tablet market in 2011, compared to only 17.3% for Android. Though they note the iPad’s share is slightly down from last year, while Android’s slightly up… 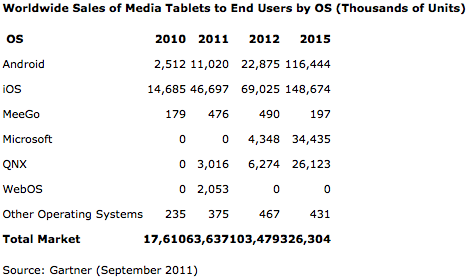 Apple is expected to keep at least 50% of the market until 2014. Gartner research VP Carolina Milanesi explains how this is possible:

“This is because Apple delivers a superior and unified user experience across its hardware, software and services. Unless competitors can respond with a similar approach, challenges to Apple’s position will be minimal. Apple had the foresight to create this market and in doing that planned for it as far as component supplies such as memory and screen. This allowed Apple to bring the iPad out at a very competitive price and no compromise in experience among the different models that offer storage and connectivity options.”

She goes on explaining Android’s challenges:

“Android’s appeal in the tablet market has been constrained by high prices, weak user interface and limited tablet applications. Google will address the fragmentation of Android across smartphone and tablet form factors within the next Android release, known as ‘Ice Cream Sandwich,’ which we expect to see in the fourth quarter of 2011. Android can count on strong support from key OEMs, has a sizeable developer community, and its smartphones application ecosystem is second only to Apple’s.”

The days ahead sure look bright for the iPad, but this is a fast world we live in where anything can happen fast. I’ll still place my bet on Apple’s iPad. You?