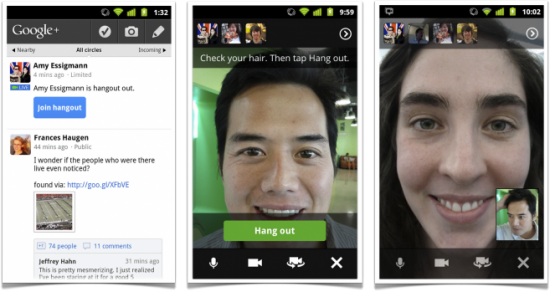 Is it just me, or does it seem like the ‘buzz’ around Google+ has quieted down over the last month or so? Now it just reminds me of that toy you begged for in the store as a kid, and then only played with for 10 minutes after you got home.

But maybe that’ll change. Maybe it’ll find its sweet spot, somewhere between the family and friend oriented Facebook and the here and now news of Twitter. We’ll find out in the coming months, as the previously invitation-only service just went public…

Alongside its announcement that the Google+ Beta is now open to everyone, Google also unveiled its plan to bring Hangouts and other options to mobile phones. Hangouts is the Google+ feature that allows you to video chat with up to 10 friends.

Obviously the company has already made the app update available to Android users, but the iOS version shouldn’t be far behind. We’ll make sure to let you know as soon as the new software hits the App Store.

Here’s the real question, who is using Google+?