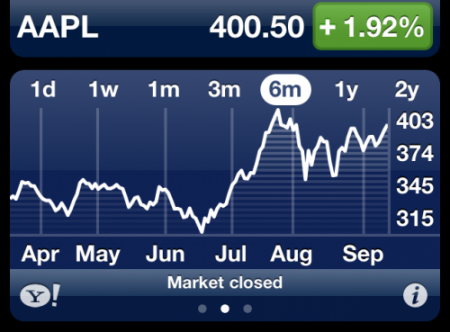 In the months and years leading up to Steve Jobs’ resignation, most of Wall Street seemed pretty nervous about Apple’s fate, post-Jobs. His ongoing health issues garnered constant speculation on whether the company could keep pace without him.

Last month, everyone was forced to confront their fears. Jobs sent out a somber resignation letter, admitting he could no longer carry out his CEO duties. But as the last few weeks have shown, Apple seemingly hasn’t skipped a beat…

Obviously, the true test for newly appointed CEO Tim Cook will come in the coming months and years. Chances are we’ll get a good look at the Jobs-less team at the company’s upcoming Fall event, where it’s expected to unveil the iPhone 5.

But the good news is that Wall Street and investors alike have complete faith in Cook’s abilities to move the company forward. In rather quiet fashion, Apple matched its highest stock value ever today, closing at $400.50 per share.

Apple’s stock prices reached $403 per share back in late-July, shortly after the company announced its record quarter. Since then, the stock has dipped as low as $356 due to a volatile market and of course, Jobs’ resignation.

While the news may not mean much to folks outside of Apple’s investor base, it is a milestone for the company. For years people feared that the iPhone-makers would flounder without Jobs at the helm. But now, it seems like they are just getting started.