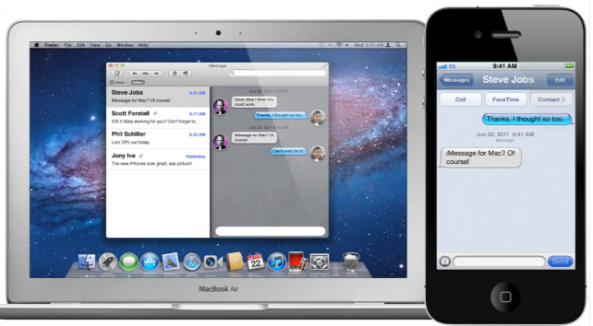 When iMessage was first announced by Apple way back in June, we all got very excited. The prospect of replacing SMS with something a little more 21st century appeals to us all, and getting rid of those ridiculous carrier charges is somewhat of a bonus.

What would really make iMessage stand out from most alternatives, and especially SMS, is the ability to send and receive messages from computers, as well as our iPads, iPod touches and iPhones. Currently, that’s not possible, though as we’ve already made clear, other solutions already offer compelling alternatives.

MacRumors has been given a spot of code that a developer has discovered deep inside the version of iChat that ships with Lion. It’s worth noting that this code isn’t present in previous releases — it’s completely new.

The suspect code mentions ‘timeRead’ and ‘timeDelivered’ states, which are not supported in any of iChat’s current protocols. Can you guess what does support them? I bet you can.

It would be no surprise if Apple did bring iMessage to iChat. In fact, it would probably be more surprising if they didn’t. But knowing Apple, anything is possible!

Would you use iMessage as a full-time replacement for whatever chat protocol you currently use, or are you more of an AIM/Gtalk/MSN kinda guy or gal?