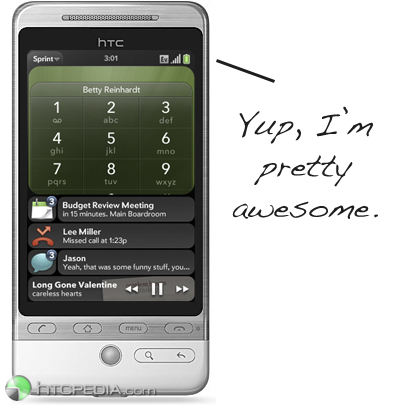 You might not know it, but HTC (High Tech Computer) has been around for more than a decade. In its earlier years, the company produced smartphones sporting older versions of Windows Mobile OS.

With the rise of Android in 2009, HTC started to focus on the up-and-coming OS. The move has helped grow the company exponentially over the last few years. In 2010, it also joined in on the Windows Phone 7 party.

But the landscape has changed in the mobile OS industry over the last several months. Microsoft and Nokia have announced a strategic partnership, and then there was Google’s Motorola purchase. So where does that leave HTC?

With both Microsoft and Google in bed with handset manufacturers, HTC seems to be feeling a bit left out. As a result, AppleInsider is reporting that the Taiwanese company is looking to purchase its own mobile operating system.

In particular, chairwoman Cher Wang mentioned that HTC has been considering purchasing webOS from Hewlett-Packard. The operating system was the focus of HP’s Palm acquisition last year, and it has surprisingly been recently discontinued.

HTC’s interest in webOS comes hot on the hills of a recent forced-licensing deal with Microsoft. The company is rumored to be paying the software giant $5 per handset for the use of Microsoft’s patented inventions found in Google’s Android OS.

Perhaps just as interesting is that Samsung also happens to be in the market for a mobile operating system. With constant run-ins with Apple’s lawyers over patent-infringing Android features, the Korean company could also benefit from a new, proprietary OS.

Lawsuits aside, manufacturers have obviously taken notice of Apple’s success with end-to-end control over hardware and software, and they are trying to emulate it. Microsoft with Nokia, Google with Motorola, and now possibly HTC with webOS.

But Apple’s been doing this for nearly 40 years, do you think any of these teams stand a chance? Tell us why or why not in the comments below.