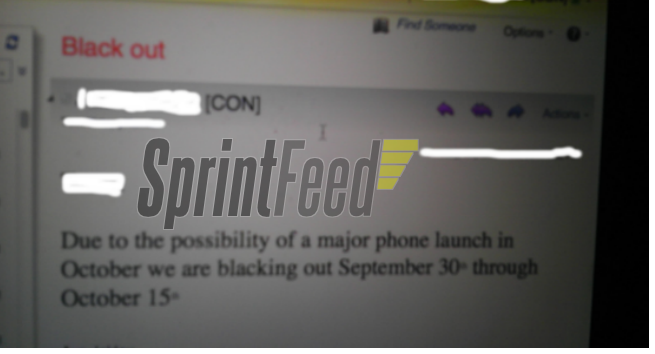 All of the evidence is beginning to point toward an October release for the iPhone 5, and Sprint has all but confirmed that fact, with the nation’s third largest carrier telling its staff that they cannot take any vacation time between September 30th and October 15th.

The news comes via Sprintfeed, who has managed to get its hands on an internal memo informing employees of the blackout…

As far as memos go, this is a brief and to the point affair, simply saying that, “Due to the possibility of a major phone launch in October we are blacking out September 30th through October 15th.”

Given the dates, and persistent rumors that Sprint will be a launch partner for the next iPhone, it doesn’t take deduction of Pink Panther proportions to connect the dots. Are we going to get a new iPhone during those two weeks? It’s a fairly safe bet.

Sprint is also rumored to offer an unlimited data plan alongside its new handset, a move that instantly makes the carrier a top choice amongst the likes of Verizon and AT&T.

If an early-October release is indeed on the cards, we’d expect Apple to be sending out invites to an event fairly soon, even if they intend to release the handset almost immediately after.

It doesn’t look like we have much longer to wait, folks!