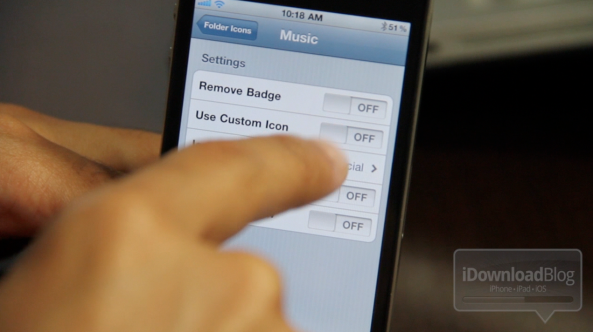 There seems to be a plethora of jailbreak tweaks available in Cydia that allow you to customize the look and feel of your iPhone’s folders, and the latest such tweak is titled FolderIcons.

What is it that separates this folder altering tweak from the recently released Beautifolders, and the staple that is FolderEnhancer? Find out inside as we go in-depth with FolderIcons on video…

Like Beautifolders, FolderIcons allows you to create your own custom folder image representations, but it goes a step further in allowing you to disable the folder background and shadow effects.

Upon testing this tweak, I did stumble upon an interesting bug that prevents you from accessing the Settings app, if you happen to rename a folder that the tweak has been applied to. Be sure to check out the video for some more details on the bug, and how to work around it.

All in all, FolderIcons is sort of like an amped up Beautifolders, but the two are still unique enough to warrant checking them out individually. Neither are of course as feature rich, or as deep as the famed FolderEnhancer, but that’s not really the niche that they’re aiming for here.

Have you tried out either tweak? Which one do you prefer? Let us know in the comments below.