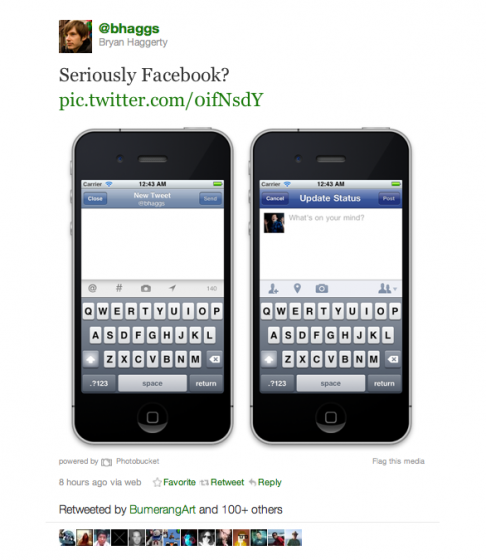 Facebook’s iPhone app has been called out by the guy behind Twitter’s iPhone app, after he spotted more than a little similarity between the two apps after a recent update. Facebook version 3.5 has received a bit of a makeover, with the new status compose screen seeing the biggest change – a change that makes it look very familiar with the Twitter compose screen.

As the picture above shows all too well, it would appear that someone at Facebook is a fan of the competition’s iPhone app, with the two sporting very similar designs…

The similarity was spotted by Twitter’s Bryan Haggerty, who tweeted the comparison shot above.

It’s not just the text entry screen that bares a striking resemblance, either. As the image below shows, Facebook’s image uploading screen seems eerily familiar as well. 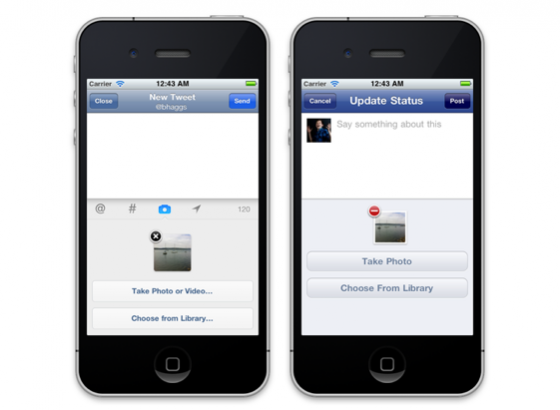 As the saying goes, imitation is the highest form of flattery, but is Facebook really copying Twitter? As TiPB’s Rene Ritchie points out, at what point does the best way of doing something just become the way to do it? There are only so many ways icons can be arranged on a screen that ostensibly does the same thing as another app’s screen. Is that copying? Maybe, maybe not.