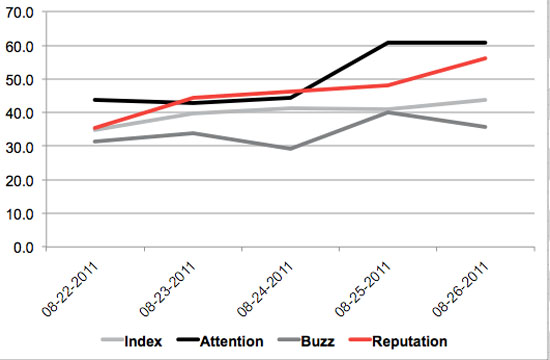 When the news fell last week that Steve Jobs was resigning from the company he had built, I felt like the world was going to collapse under my feet for a few seconds. I wasn’t the only one. Tech bloggers, analysts and investors knew it was the end of an era.

The news was widely covered all over the world. In France, where I currently am vacationing, I read countless stories and watched tons of news reports that were praising Steve Jobs for the amazing job he’d done at Apple. Steve Jobs. The face of Apple. The salesman. The visionary. The dictator. Gone. Nothing would ever be the same without him. Some went as far as saying Apple was done, forgetting for a minute that Tim Cook, the newly appointed CEO, had been running the company for months, in what were Apple’s best financial times ever.

According to BrandIndex, a company that tracks public perception of thousands of brands across the world every day, the Apple brand is proving bigger than Steve Jobs himself.

But rather than drive brand perception scores down as one might expect, YouGov BrandIndex’s Index score, its key measurement of brand health, rose several points for Apple since Jobs made his announcement on August 24th. The Index score encompasses adult 18+ consumer perception of such measurements as quality, value, reputation, satisfaction, impression, and the willingness to recommend the brand to friends. Apple’s Buzz score also improved modestly after the announcement, indicating that more US consumers seemed to react positively to the news than negative.”

If anything, all the media coverage Apple got after Steve announced he was stepping down helped the company improve its brand recognition. This free advertising for Apple helped Cupertino reach new highs in consumer perception.

Who would have thought?