Leaked iPhone components and parts have been surfacing recently, with the most recent prototype part relating to the allusive iPhone ‘N94’ prototype.

Rumors have been that the next iPhone will feature a larger screen with an edge-to-edge bezel, but this prototype leak indicates a LCD display completely identical to the iPhone 4. It’s believed that the N94 prototype will be a cheaper model very similar to the iPhone 4, and the lower tier device is expected to rely heavily on iCloud for storage and streaming.

Yesterday, we showed you what we believe to be the back panel of the iPhone 4S, and this N94 prototype leaks also seem to be synonymous with a cheaper ‘4S’ device. This leaked front panel matches up nicely with the back frame we’ve already seen — both parts look almost identical to the iPhone 4. 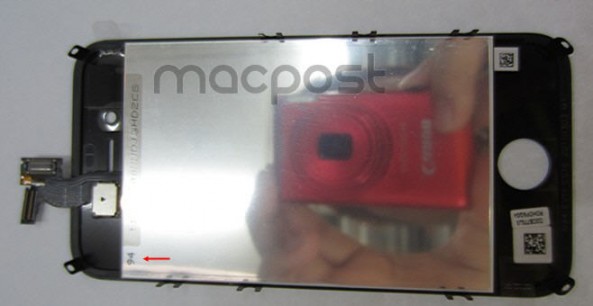 “The LCD part is clearly labeled as N94 “EVT1″ (Engineering Verification Testing) with date ’03-March-2011′. Whilst, the white front cover posted few days back was labeled “EVT2″ with date ’07-June-2011′. Since these are marked as N94 EVT1, the images are definitely of next generation model.”

Engadget also got these parts, and both reports seem to match up. The form factor of these N94 parts strongly suggests the rumor of a cheaper, second iPhone model to be released alongside a completely redesigned iPhone 5 this Fall. The iPhone 4S, internally prototyped as the N94, looks to have the same 4 inch display as the iPhone 4. The iPhone 5 will most likely be the device to have a different screen size, with the good possibility of an edge-to-edge bezel design.

Rumors say that the iPhone 5 will have a metal chassis with a new display and faster internals. This N94 device looks to be the retooled iPhone 4 that Apple is gearing towards the cheaper smartphone market.