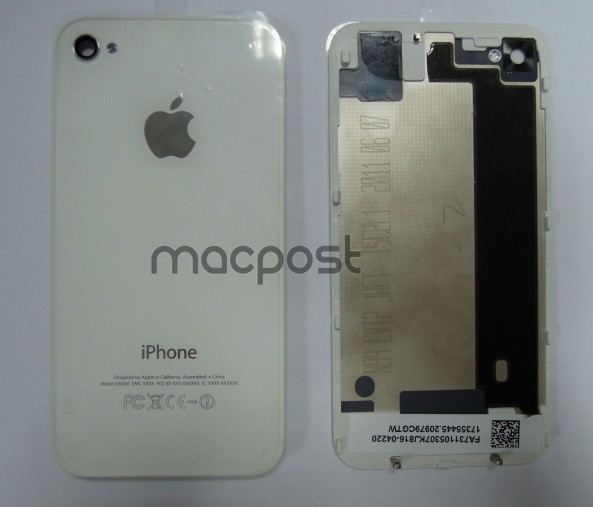 Earlier today, we saw photos of components that may or may not pertain to one of Apple’s upcoming smartphones. The frame resembled that of an iPhone 4, but with a modified antenna.

Now another purported next-gen iPhone part has surfaced — the backplate. And like the aforementioned frame, it looks extremely similar to its predecessor. So how do we know it’s a next-generation component? Because it says so…

MacPost originally published the photo, along with several others of what they claim are iPhone 5 parts. But the back casing in particular stands out because it has the markings of an Apple prototype.

The cover is labeled EVT and is dated June 7, 2011. EVT stands for Engineering Verification Test, which is followed by the Design Verification Test. The date makes sense in the device’s timeline we saw leading up to production.

Perhaps the biggest clue on the case is the N94 marking. A few months ago, 9to5Mac uncovered two new Apple devices codenamed N93 and N94 buried deep within iOS 5. The iPhone 4’s (GSM) internal codename is the N90.

Add this new back casing to previous evidence, like the T-Mobile-branded N94 device BGR exposed earlier this year, and things start coming together. Sort of.

Whether Apple releases one smartphone this Fall, or two distinctly different handsets, you can bet we’ll see the iPhone 4’s design reincarnated. The second scenario is obviously more exciting, as it leaves the door open for a major refresh.

But maybe Apple doesn’t need that this year. Maybe Apple’s big play this year is to expand carrier partners, which would have more of an impact on sales than a major redesign.

What do you think we’ll see this Fall?