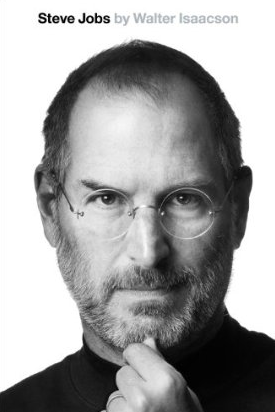 The official biography of Steve Jobs is still a few months away, but the new publication date of November 21, 2011 is certainly a lot sooner than the original date of March 2012.

As a highly anticipated, pre-ordered best seller, the biography has also received its first cover. However, given the book’s tendency to change details pre-launch, we wouldn’t be surprised if a new photo adornes the front page before we get our sticky, little hands on it…

The cover is suitably understated, featuring a black and white image of Jobs, with the books title above his head.

Speaking of the title, that’s also gone under the knife, with a new, shorter version now apparently the choice of the publisher. Previously titled, iSteve: a Book of Jobs, then Steve Jobs: A Biography, the book’s new title is just as simplistic as its cover, with a simple ‘Steve Jobs‘ being enough to whet the appetite this time around.

Title changes aside, the most exciting news without a doubt has to be the new release date. We can’t wait to get our hands on the book, and we’re sure you can’t either.

Steve Jobs by Walter Isaacson is available for pre-order now, both in paper and Kindle form.