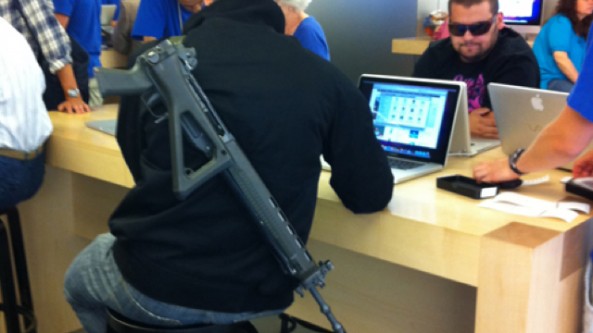 Apple Stores have been the source of a few strange stories over the past couple of weeks. First, there was the case of the fake retail locations that starting turning up in China recently.

We’re actually not really sure how this one ends. Gizmodo just posted this crazy snapshot of what appears to be a man in a dark-colored hoody with a SIG SG 550 assault rifle strapped to his back, and they’re not really sure of the circumstances.

The image obviously brings the question to mind, “What’s he doing with such an unusually large firearm?” While answers could range from “He’s an active military-member,” to “It’s just a prank or viral marketing stunt.” We’re going to go with “He’s an upset iPhone user waiting to see a Genius.”

Apple Stores are certainly known for their high level of tolerance for its customers and their behavior, but this might be crossing the line. I’m not sure what’s more disturbing. The guy toting the gun, or the fact that no one else seems bothered by it.

What do you think? Can you think of a good caption for this photo?