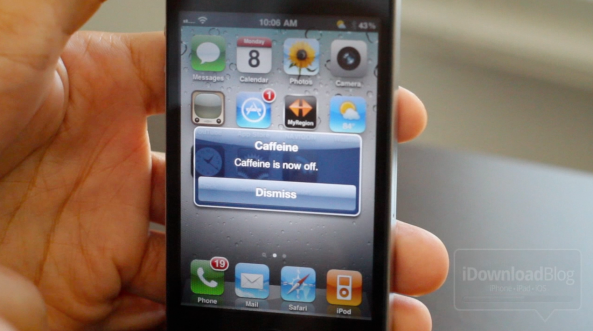 One of my favorite Mac apps has finally made its way to iOS…well, kind of. Caffeine, is a popular Mac app that prevents your Mac from going into sleep mode for a set interval of your choosing.

The Caffeine on the jailbreak store isn’t related in anyway besides the name, but it aims to do something similar.

The jailbreak version allows you to prevent your iOS device from autolocking by means of a handy Activator action. It’s not nearly as polished as the app it borrows its name from, but it’s not too shabby either. Check past the jump to see Caffeine in action on video…

Unfortunately, Caffeine doesn’t have the ability to stop your iPhone’s screen from dimming, but it does prevent it from autolocking. This is especially handy if you’re like me, and you’re constantly shooting footage of the iPhone; I imagine there are plenty of other circumstances where it can be useful as well.

Just like the original Caffeine, this version is also free. I’m not sure what the folks behind the real Caffeine think of this jailbreak tweak pilfering their name, but at least it somewhat lives up to the goodness of the original Mac app.

Is your iPhone having trouble staying awake? Then you might want to give it a nice sized dose of Caffeine. What do you say?