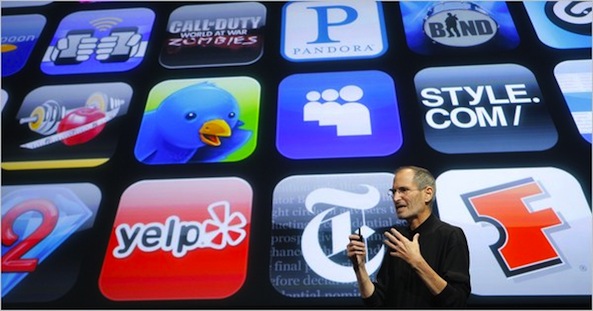 Last month, Apple announced that their iOS App Store had reached 425,000 live applications. By “live” I mean currently active and ready to download, not the total number of apps that have ever been published.

Now, nearly a month later, it seems the mobile world’s favorite application destination has reached another significant milestone. There are now 450,000 active applications in the App Store…

AppsFire.com reported the good news this morning, but notes that the Store officially crossed 450,000 on August 5th. The number is a combination of 337,000 iPhone-compatible apps and 114,000 iPad-optimized apps.

In addition to being just 50k away from half a million titles, Apple is also on the verge of reaching 100 thousand publishers for its mobile platform. There are currently 98,713 developers publishing their software through the App Store.

While they have nearly double the amount of apps as their Android competitor, I wouldn’t count on Apple resting on its laurels. With iOS 5 coming this Fall and the possibility of Apple TV apps in the future, I’d say they’re just getting started.