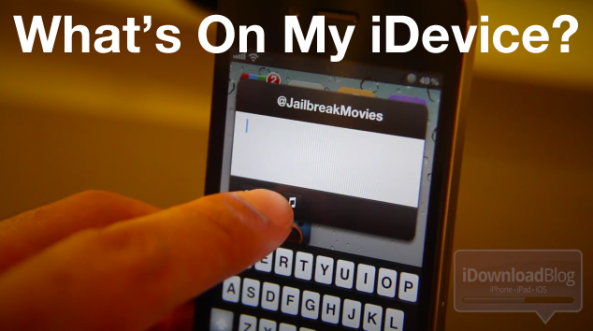 So I’m a bit late with the July 2011 edition of What’s On My iPhone, but better late than never, right?

As a result, I’ve changed the moniker to What’s On My iDevice? Inside you’ll find coverage of TwitkaFly 2.0, A legit Spotify replacement for jailbreakers, and a few more goodies for your consumption. Check out the full video inside…

This month’s entry is an eclectic selection of both jailbreak apps, App Store apps, and tweener apps – apps that should be on the official app store, but for some reason have been relegated to Cydia.

The first item up to bat is TwitkaFly. We’ve covered TwitkaFly on iDB before, and it is an app that I’m quite fond of. Release 2.0 now includes TweetBot support, which is awesome for dedicated TweetBot users (peers in Alex’s general direction). The interface has also been improved as well, it’s almost as if it’s a cross between TweetBot and the official Twitter app with regards to the visual style. TwitkaFly is a definite must try for heavy Twitter users.

Next up is Grooveshark, an app that I’ve overlooked for quite some time, but have been pleasantly surprised with. In my opinion this app has some quality features that rival that of the much-hyped Spotify. After some heavy usage, I stand by my opinion that Spotify is underfeatured and overpriced, but that’s a debate for the next What’s Not On My iPhone After My Month Trial is Over. Grooveshark is admittedly more Napsterish in its implementation, and it seems just a tad shady; but it is, apparently, totally legal.

Now let’s switch gears and head over to the iPad. One of the tweaks that I’ve become quite fond of is NoLockScreen — a tweak that does as its name states, and gets rid of the lockscreen altogether (also available on iPhone). This is a handy tweak to have when you just can’t be bothered by the lockscreen. Obviously, you’re not going to want to use this if you take your iPad out of the house (for security reasons), but if you’re iPad is usually stationed at the home front, it’s a time saving tweak, and it’s great when recording videos of the iPad.

Batting cleanup, is a jailbreak tweak for the iPad that really deserves its own video. It’s not because of a lack of love on my end, it’s because of lack of time. Trust me, RetinaPad is definitely on my plate of jailbreak tweaks to cover in detail. RetinaPad is the brainchild of tweak wizard Ryan Petrich, and it basically boosts the quality of any Retina Display enabled app when ran on the iPad. On some apps, the increase in quality will be subtle, but for most, it’s pretty striking. Take TweetBot for example. TweetBot + RetinaPad on the iPad looks much better than it does running without RetinaPad. If you use any iPhone only apps in 2X mode on the iPad, and you’re not using RetinaPad, you’re missing out.

So folks, that’s last month’s What’s On My iDevice. Was it good, disappointing, etc? Let me know what you think in the comment section below!