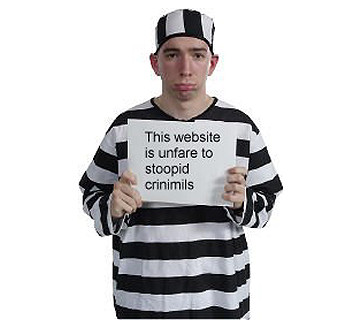 Here’s a little lesson to all the would-be criminals out there: If you are going to break into your ex-girlfriend’s house, don’t leave your iPhone behind as evidence. While most of us consider that common sense, that doesn’t seem to be the case with Mr. Jason Scott Davis.

The 34-year-old Northern Californian is in custody as the prime suspect of a late-May home invasion. Authorities arrested Davis after discovering his iPhone in his girlfriend’s bathtub the night of the robbery…

“In describing Davis as a person who “falls into the dumb crook category,” San Mateo County District Attorney Steve Wagstaffe says Davis was arrested after he was contacted by a detective who pretended to be a person who found the phone.”

Davis is being accused of breaking and entering and taking a number of things, including jewelry, clothes and personal items. And get this, he went before a judge on Wednesday and pleaded “not guilty.”

If you ask me, someone should have told this guy about the Find My iPhone app. Maybe then he’d have known that his phone had been sitting in San Mateo’s Police Department since the burglary. Davis is currently awaiting trial and his bail has been set at $50,000.