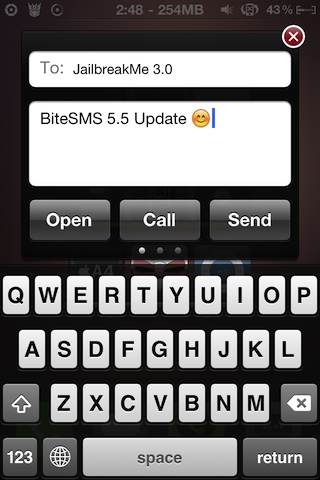 The biteSMS team has pushed out a compatibility update for JailbreakMe 3.0.

Just over a week ago, we discovered that Cydia’s popular text messaging tweak, biteSMS, was conflicting with Comex’s latest jailbreak, JailbreakMe 3.0.

BiteSMS’ quick reply functionality would send users device’s into an infinite boot loop. This was quickly confirmed with multiple sources, predominantly the biteSMS support forum, JailbreakQA, and of course our readers here at iDB.

As pointed out by one of our readers, Massie, the administrator of the biteSMS support forum had acknowledged what was going on:

“Guys, big apologies but am actually away on holidays for a week. Given devs were flat out on iOS 5 seemed like a good time to go!!! Bugger….have emailed them and we will get a fix out as soon as we can. Most likely mid week.”

The biteSMS team has followed up on its promise with its latest 5.5 release. Instead, you can access biteSMS 5.5 by adding the tweak’s own beta repo on Cydia: http://cydia.bitesms.com

If you’re willing to wait, the patch has also been submitted to the BigBoss repo and should be available to the public soon. Users so far have confirmed that the fix is stable and are able to use the Quick Reply feature without any issues.

Now that these issues have been ironed out, whats next for the biteSMS team?

As pointed out on their home page, expect iOS 5 compatibility, iMessage support and a redesigned interface.

biteSMS 5.5 is now being hosted on the BigBoss repository.

Have you tried the beta release on the biteSMS repo? Are BiteSMS and JailbreakMe 3.0 working together for you without any issues? Let us know your experience below.