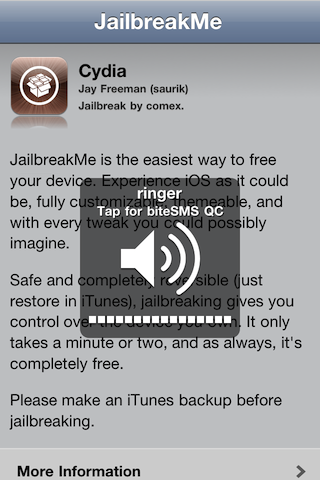 A couple of days ago we reported that the iPad Camera Connection Kit stopped working after using JailbreakMe 3.0. It looks like another issue has reared its ugly head which looks to affect jailbroken devices on a wider scale.

Reports are surfacing that the popular jailbreak tweak BiteSMS is conflicting with JailbreakMe 3.0. Confirmed on the BiteSMS forums, that sending a text message through BiteSMS’ quick reply feature will crash your device and send it into an infinite boot loop. The only solution to remedy this as of writing is to restore your iDevice…

JailbreakQA’s main page has also been updated to alert users of this known issue:

“Jailbreakme users also report that BiteSMS’s Quick Reply feature causes a boot loop (if you need this, restore and re-jailbreak with redsn0w instead).”

While I’m sure this issue will be sorted out soon through an update from the BiteSMS team, in the meantime it’s recommended you don’t install BiteSMS if you plan on using JailbreakMe 3.0 or alternatively jailbreak 4.3.3 with RedSn0w.

Now, the problem may not be because JailbreakMe is buggy or rushed. It could simply be that JailbreakMe is the first jailbreak tool to use the unionfs concept. As Comex previously explained, past jailbreaks required ‘stashing’ large file directories within iOS and moving symlinks from the original location to a new one. Basically, splitting the file system to make iOS adapt to the jailbreak. This is why the jailbreaking process usually takes some time.

Code can become confused because after files have been moved, file names no longer match, causing instabilities within iOS and requiring additional patching. JailbreakMe is more adapted to the iOS itself, instead of having to make major alterations to the file structure to work, files from Comex’s jailbreak are merged with existing directories.

This explains the relative ease and speed of the jailbreak process using JailbreakMe compared to previously used jailbreaks such as RedSn0w.

One explanation could be that the reason conflicts may be manifesting themselves is that some jailbreak applications such as BiteSMS have in the past relied on the altered directory locations from older jailbreaks, instead of Comex’s unionfs method of jailbreaking.

We may hear of more incompatibilities with other tweaks and functions in time because of this, but some developers have already taken the initiative by updating their own work for JailbreakMe 3.0, such as Activator.

Have you been affected by this? Found a way to get out of the boot loop without having to restore and re-jailbreak? Have you come across any other tweaks or apps not playing nice since you’ve used JailbreakMe 3.0? Let us know in the comments section.