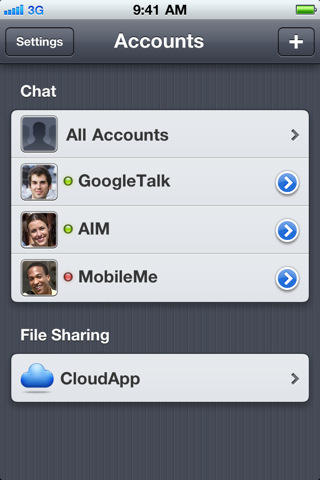 The iPhone was once described by Apple CEO and co-founder Steve Jobs, as a ‘revolutionary Internet communicator’ and we can’t really argue with that. Since Apple unleashed the App Store onto the iPhone and iPod touch owning public, the role of a mobile communicator has changed considerably.

Previously, the best way to get in touch with someone whilst away from your desk was to call them. Thing is, if you’re anything like me, you hate talking on the phone. That’s where SMS comes in, but those 140 characters ain’t cheap, especially if you happen to reside in the United States.

IM, or Instant Messaging, uses the power of the internet to kick those pesky SMS charges into touch and, at least until iMessage arrives, presents the best way to send messages between iPhones…

But which to choose?

There are a raft of IM clients available in the App Store, but few capture the beauty of iOS like Verbs.

The popular AIM, MobileMe and Gtalk client just received an update which makes it even more useful than it already was, just check out some of the updates laid out by TiPB:

While many will point to the addition of push notifications and (possibly, rightly) say that they should have been there sooner in order to maintain parity with other clients then we may just agree. However, there is no denying the Verbs magic is in its user interface and experience.

We’d suggest giving it a whirl if your protocols are supported.

Verbs is $2.99 with in-app purchases available for Pro features, such as the aforementioned notifications.