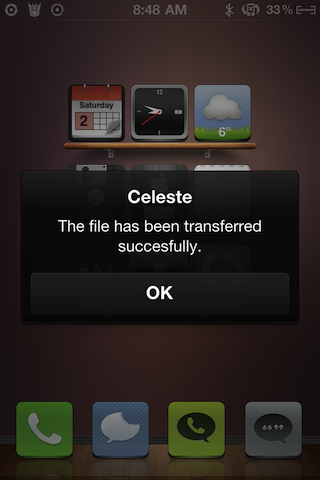 CocoaNuts, the developers behind popular Cydia tweaks such as Yourtube 2 and MarkRead, have after what has felt like an eternity, finally updated their latest bluetooth file sharing app Celeste to v1.0- 73.

Celeste was met with bitter reception after its initial release with a plethora of bugs found by users who had purchased it at its limited time launch price of $7.99. Although initial releases are expected to have bugs and faults, Celeste was in no shape to be released. It also didn’t help that at the time, its dependency tweak ActionMenu was not updated for iOS 4.3 and wasn’t reportedly playing nice with Celeste. It was broken.

Initial Twitter updates from the developers appeared promising but with its last update on Celeste’s status on the 10th of April many users were left in the dark as to Celeste’s future other than the promise that the tweak would be fixed “…very, very soon”.

An update was finally pushed out of no where on June 13th, with no announcement of its release on the @CelesteSupport and @CocoaNuts Twitter feeds…

The change log of Celeste was brief with a simple entry:

So does Celeste v1.0- 73 live up to expectations? After a few weeks of using it, I can personally say yes! In conjunction with ActionMenu update 1.2 and its support for iOS 4.3, I found the latest update running a lot smoother without any issues. Tenfold. Transferring files between my MacBook Air to my iPhone works seamlessly. I also had no problems transferring files to and from my iPhone to my old Sony Ericsson W880i. Just a point of note bluetooth transfer from iPhone to iPhone is not possible unless both iPhones have Celeste installed.

Celeste’s SBSettings toggle now works great with no problems turning the feature ON and OFF. Transfer from the Camera Roll works as it should with transfers of mp3 automatically placed into your iTunes library thanks to Gremlin2. The features and settings feel native. It works and it does a good job at it.

Celeste automatically enables bluetooth to send files to another device and automatically disables itself when transfers are completed. A simple SBSettings toggle for Celeste allows your device to be discoverable and receive files from other devices.

One thing I did notice is the dependency tweaks installed with Celeste are fairly extensive and I can’t help but feel this is putting noticeably more battery drain on my device after installing, however with the ability to transfer files easily from my iPhone to other devices is for me worth it, and I still get a decent 12-24 hours of normal use without having to recharge my device.

So is Celeste worth the $9.99 price tag? I’m inclined to say yes, I’ve already used this tweak numerous times without fail and I thank CocoaNuts for pushing out this must needed update and recommend it to others.

Have you tried Celeste’s latest update? Come across any issues or noticed a significant battery drain? Let us know in the comments section.