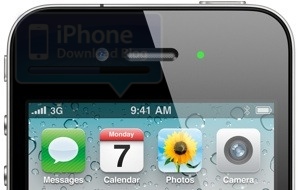 I thought a lot about whether I should publish this or not and I came to the conclusion that it was worth throwing out there. Now you have to take what’s to come with a grain of salt because it comes from an anonymous tipster that we had never heard of before. After doing a quick check on the IP address of the sender though, I can tell that our tipster is not too far from Cupertino, which I admit is not an indication of trustworthiness.

An LED indicator? Yes, just like the good old BlackBerrys have right above the screen.

I have to say that’s one of the features I miss about my BlackBerry. Having a flashing LED to tell you you have a missed call, or an unread text message was good to have, especially when I was stuck in those long meetings where no ringtones or vibrations would be allowed.

Mr T claims that if Apple added flash alerts in iOS 5, it’s not for the iPhone 4 but for the iPhone 5. As he notes, how practical is it to have a flashing LED when this LED is on the back of your phone?

Now would Apple take the risk of defacing the iPhone with a flashing LED? Is this feature even needed? I liked this on my BlackBerry but I never thought to myself “gosh I wish Apple would put an LED indicator on this.”

Taking into account that this comes from an unreliable source, what do you guys think?