It was only a matter of time before an iOS 5 inspired lock screen camera shortcut appeared for current gen iOS firmware, and that time is now.

CameraLock is a tweak by tweaking expert Filippo Bigarella, who unsurprisingly is behind the similar FlashLock tweak inspired by our very own Sebastien Page.

In the very same vein of the iOS 5 feature, CameraLock places a handy little camera shortcut on your lock screen for easy access.

But there are a few differences between this implementation, and the version that is featured in iOS 5, as I highlight in the following video walkthrough…

The first big difference between CameraLock and iOS 5’s camera button shortcut, is the amount of customization. You simply won’t find this type of customization in a vanilla flavor of iOS.

On the flip side of the coin, the iOS 5 version features the ability to access the camera, even while the device is passcode locked. As of now, that functionality isn’t present in CameraLock.

One more point to note is that you can’t use FlashLock and CameraLock simultaneously; only one can be installed at the same time, but that of course might change in the future.

If you’re looking to bring iOS 5 inspired functionality to your current gen firmware, and your iPhone is jailbroken, then CameraLock is a great starting point.

Let me know what you think about this tweak in the comments below.

Update: CameraLock has been updated to allow you to access the camera even when you have a passcode enabled lock screen. This functions similarly to iOS 5’s passcode bypass feature, although there are a few discrepancies between the two. 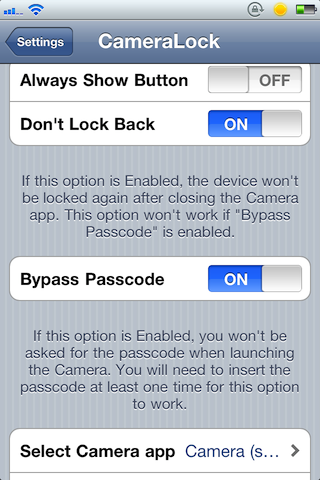 The good news is that this method is relatively secure, it will force you back to your passcode lock screen after exiting the Camera app. What it won’t do, is prevent you from viewing the rest of the pictures on your camera roll, but I imagine that would be a lot of work in order to implement that feature. The updated version should hit the Cydia repo soon.