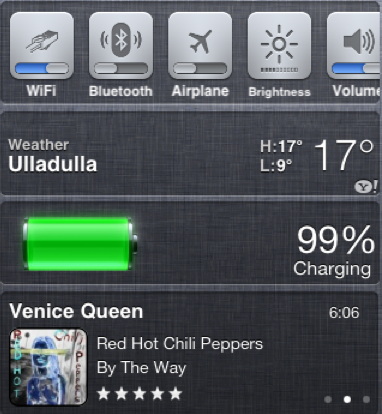 Jailbreak developers have been on a roll over the past two weeks, releasing several custom widgets for the new Notification Center in iOS 5. From the looks of things, it doesn’t appear that the community plans on slowing down anytime soon.

Programmer Aaron Wright has recently released not one, but two jailbreak tweaks for Apple’s iOS 5 beta software. Jailbroken folks on iOS 5 are more than welcome to try out the 2 new widgets, which are available for free from the developer’s repo…

The first widget is called BatteryCenter. It displays the familiar charging graphic in real time on the Notifications Center menu. It also shows the percentage of charge left in your iDevice battery, as well as if it’s charging or not.

The 2nd one is entitled MusicCenter. It showcases the track information of the current song you’re listening to along with album art. Wright plans to add a Twitter option and music controls in the coming weeks.

Both widgets are available for free in Cydia, just make sure you add cydia.wrightscs.com to your list of sources. While neither tweak is particularly groundbreaking, it’s nice to see that developers are already feeling cozy in iOS 5. Jailbreak killer my foot.

What do you think? Have you installed either widget yet?