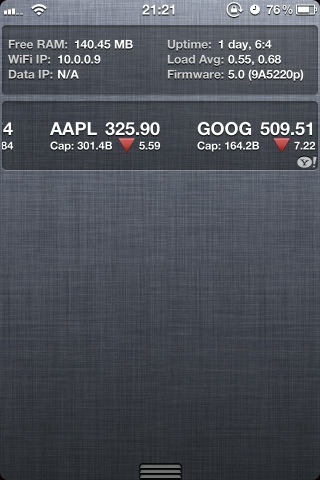 It’s crazy to think that within a week of Apple releasing the first beta version of iOS 5, members of the jailbreak community have already hacked the new software and developed several version-specific tweaks.

The main area of focus for jailbreak developers appears to be iOS 5’s new Notification Center pull-down menu, since it provides the perfect place to present custom widgets. SpringPrefs is the latest custom widget to surface, and it provides access to all of your iPhone’s system stats at a glance…

SpringPrefs displays the device’s IP, Wi-Fi IP and its current firmware version. It also tells how much free RAM is available on the device, which can be extremely handy as your device’s memory fills up.

The downside? There’s no telling when/if it will be available. The developer GreySyntax tweeted today that the widget won’t be released until Apple’s iOS 5 NDA (Non-Disclosure Agreement) is lifted — when iOS 5 officially launches this fall.

The drop down menu has a lot of potential in both the jailbreak community and Apple’s ecosystem. All eyes are on the Cupertino company to see if they open up the area for 3rd party developers to create widgets, or send the feature underground.