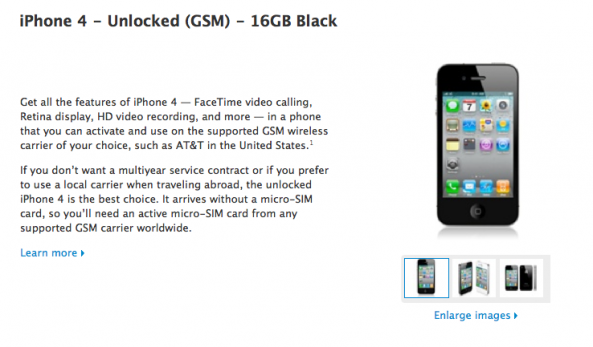 We reported a recent rumor that Apple was going to start selling factory unlocked versions of the iPhone 4 in its U.S. retail stores this Wednesday, and that rumor has already come true.

Already, both the 16GB and 32GB GSM versions of the iPhone 4 are available as unlocked devices on Apple’s online store. Sources still confirm that the devices will hit retail locations across the country tomorrow.

These factory unlocked iPhones will allow for SIM-swapping on international carriers, as well as operation on T-Mobile’s EDGE network in the U.S. There isn’t much of an incentive for purchasing an unlocked iPhone for use in the United States only, as you would still be limited to AT&T’s network for 3G speeds.

“Get all the features of iPhone 4 — FaceTime video calling, Retina display, HD video recording, and more — in a phone that you can activate and use on the supported GSM wireless carrier of your choice, such as AT&T in the United States.1

If you don’t want a multiyear service contract or if you prefer to use a local carrier when traveling abroad, the unlocked iPhone 4 is the best choice. It arrives without a micro-SIM card, so you’ll need an active micro-SIM card from any supported GSM carrier worldwide.”

There’s been no word on if Apple will unlock previously purchased, carrier-locked iPhones, but that seems unlikely. If that service is offered, expect a heavy fee to cover the carrier contract termination.

You can order an unlocked iPhone 4 on Apple’s online store. In our recent poll, most of you have already said that buying one of these devices is worth the price.

Apple is set to announce a new iPhone this September, so to would be wise to wait a few months before dropping all that cash on an unlocked iPhone 4.