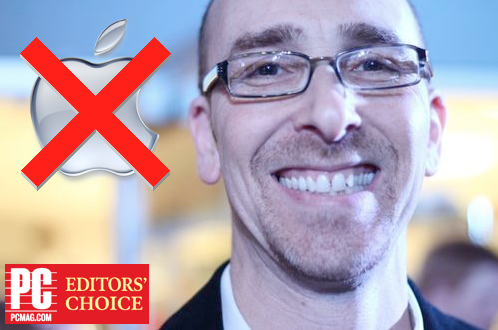 We told you there is a rumor going around that Apple might start selling factory unlocked iPhones in the US, starting this Wednesday. The rumor was started by @ChronicWire, a “side account” of fame jailbreak developer Chronic.

Today, PC Mag Editor in Chief Lance Ulanoff wrote a piece titled “Unlock iPhones: Why Apple Won’t Do It” where he explains his point of view on the rumor. And boy his point of view is screwed. Let’s dissect it and analyze…

Yes, fanboys, early adopters, and geeks with time on their hands will snap them up. Even if the phones cost almost $600, they will buy. Why? Because they probably have jailbroken every iPhone since the product launched in 2007. They want Apple’s lovely slab phone, but they want it their own way—even though toying around with the device to make it do things Apple doesn’t want it to does not include getting it to run on another carrier.

So, right off the bat Lance goes against his main idea and admits that people will buy unlocked iPhones. If you contradict yourself right from the beginning, it’s a pretty bad start.

I read that last sentence probably 10 times. I still don’t understand what Ulanoff is trying to say here. I think he got lost in his head somewhere. I’m French so maybe there is a barrier language here. If you figure out what that paragraph actually means, please let us and Ulanoff know.

The excitement around an unlocked iPhone would also make more sense if the radios inside the phones could be easily used on similar networks: they can’t. As our mobile expert Sascha Segan explained to me, not every carrier uses the same frequency, even when they are using the same network technology.

Dear Lance. In 2010, I traveled with my unlocked iPhone to Australia, New Zealand, Indonesia, Thailand, Cambodia, Laos, Vietnam, and France, and guess what? I was able to use my unlocked iPhone with SIM cards from local carriers in each of these countries. Your mobile expert didn’t seem to fill you in completely on the matter. Back to the drawing board, please.

Sure there are frequencies that are not supported by the iPhone, but it’s in no way stopping carriers to still be able to have functioning SIMs on the iPhone. T-Mobile USA for example will work perfectly well on the iPhone, except you will not be able to get 3G. Edge will work fine though. So Lance is wrong. The iPhone can easily work on all GSM networks.

In China, the iPhone is considerably more expensive. I guess someone could buy a $600 unlocked iPhone here and sell it there for a hefty profit. Clearly Apple wouldn’t want to enable that kind of transaction.

Well Lance, I have bad news for you. If you had done 2 minutes of research prior to writing this thing, you would have realized that the iPhone is already available, factory unlocked, in many countries in the world, including from our Canadian friends. So don’t worry, the evil Chinese won’t come to your country to buy those iPhones away from your fellow American citizens. Chinese already buy unlocked iPhones directly from Canada.

That sounds like an attack based on a health-related issue. How classy of you, Lance.

Consumers do not like the rigmarole of finding a carrier and working through what will likely be a more complicated activation process.

Anyone looking for an unlocked phone knows what to expect. Unlocked phones are not for everybody, they are for a certain target market, usually international business travelers. People that buy unlocked phones do it on purpose, and they know exactly what carriers they’re going to be using prior to making the purchase.

Besides, like I was able to verify during my international travels, it’s always pretty easy to go to a country, and get a local pay-as-you-go plan. There is no “complicated activation process”. You buy the SIM, you put it in your phone. Sounds simple enough to me.

Apple does not create niche products, devices that will sell to an excited few who can, perhaps, generate further interest in broader product offerings. Apple goes big or it goes home.

Once again, Lance seems to not have done his homework. Historically, Apple has been a company that sold niche products. Heck, they broke the 10% market share in the Personal Computer market just a few months ago. The iPhone and the iPad have proven hugely popular and have allowed Apple to reach a larger market, but until 2 years ago, Apple was still an outsider who focused on niches rather than wide segments.

In fact, most iPhone jailbreakers know that hacked iPhones can turn into useless “bricks” when reconnected to iTunes for an update.

This is not 2007 anymore. While you could have bricked the first generation iPhone, it is now virtually impossible to brick an iPhone 3G, 3GS, or iPhone 4. You just can’t. Try as hard as you can and worst case scenario, you’ll still be able to put your iPhone in DFU mode and restore it using iTunes. Lance clearly doesn’t know what he is talking about here.

Google has sold unlocked phones. The Nexus One was unlocked. It helped launch Google’s own online phone store. Now where is that today?

Google failure with the Nexus S has nothing to do with the fact you could unlock it. What’s Lance’s point here? I can’t understand.

They even let you unlock the regular Nexus S after 45 days so you can hook up with a different carrier (even a foreign one). Please, how many consumers in the U.S. are actually doing this?

Yes Lance, please tell us how many consumers are actually doing this? I’m listening. If you don’t have any data to backup your non-sense, then avoid the non-sense. Besides, as I said above, unlocking is definitely not for the larger part of the population. We know that. Apple knows that. There is no need to reiterate.

How has Google become the number one mobile phone platform in the U.S.? (IDC puts it at 39% worldwide) It’s done so by offering a steady stream of carrier-locked Android devices. Verizon, T-Mobile, Sprint, and AT&T: They all have them.

First, Google is not a platform. Android is. Now for the clarification, Android didn’t become #1 mobile platform because it offered a steady stream of carrier-locked devices to all US carriers. It became #1 by flooding the market with cheap, or let’s call them affordable, devices. Just like Windows has been outselling Mac for years, there is actually no merit in throwing a bunch of crap against the wall to see what sticks.

While rooting Android devices to access an Android OS build your carrier has yet to supply does happen, I haven’t noticed Android consumers expressing much interest in unlocked Android devices.

Data? Survey? Study? Or is it just your “gut feeling” that makes you claim that not many Android users have interest in unlocked devices? But again, we know that unlocking is not for everyone so what do you expect? People rioting in the streets begging for an unlock?

Unlocked phones get a lot of media attention, but they just aren’t that interesting to consumers. Ramon Llamas, IDC’s Senior Research Analyst, Mobile Devices Technology and Trends, estimates that “less than 1% of all mobile phones were sold unlocked in the United States”. Ooh, that sure does sound like a scintillating market for Apple.

What are we going to do with you, Lance? Don’t you understand that we all know that unlocked phones are not for everyone? You finally backup your claims with some data but unfortunately this data doesn’t make much sense. The reason why less than 1% of all phones sold in the US were unlocked is because carriers don’t offer this option easily. They want to lock you in a 2-year contract, so of course they’re not going to brag about their unlocked phones. They keep this on the down low for their own good.

Besides, Apple is not scared about going after the small markets because even if they don’t sell may, they make loads of money on each device sold. Don’t believe me? Maybe you should check out this study that showed that although Apple represented only 5% of phone sales in the first quarter of 2011, these 5% actually represented 55% of the profits of the whole industry. Apple doesn’t want to sell a lot. They want to make a lot of the few units they sell. It seems to work pretty well for them so far.

And who is this Chronic Wire, anyway? He’s a guy who’s posted a grand total of 12 tweets since June 6 (of this year). He may be working the stock room at the local Best Buy (this is how Boy Genius Report gets most of its “scoops”—from well-placed blabbers at your garden-variety brick and mortar consumer electronic store).

When PC Mag has the influence that BGR enjoys, maybe Lance will be able to talk smack about them. For the time being, it’d be wise to keep quiet and not try to discredit publications that are far more influential and respected than PC Mag is.

Now for the story, @ChronicWire is an account maintained by fame iOS hacker Chronic, one of the founding members of the Chronic Dev Team who was responsible for GreenPois0n, the first iOS 4.1 jailbreak last year. The guys is legit.

What has Lance done lately besides talking shit about highly regarded people in the iOS world?

If Chronic Wire is right, he will have succeeded. He won’t be, though. As I said before: Apple isn’t stupid.

Apple might not be stupid but Lance just proved he was. Whether he’s right or wrong about unlocked iPhones coming out this Wednesday, his poorly researched article and his attacks at Apple, Chronic, and BGR are the sheer evidence that he doesn’t have the shoulders big enough to be the Editor in Chief of a somewhat popular publication like PC Mag.

UPDATE: The iPhone 4 is now available unlocked from the Online Apple Store. It’s official, Lance Ulanoff is the wrong tool for the job.