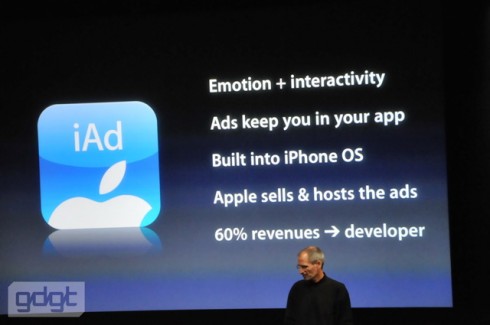 I’m sure everyone is familiar with iAds by now. The service that Apple launched last year promised to change the way customers interact with advertisements. As with a lot of new ventures, the mobile ad platform got off to a rocky start.

Advertisers didn’t like the mandatory $1,000,000 buy-in on top of several other complaints. Finally, Apple compromised and made some serious adjustments to iAds, in favor of its partners. They cut the buy-in in half and even created an app showcasing iAds, but did the changes stop there?

Apparently Apple has made another amendment to iAds to appease the advertisers. However, this change could seriously burn a lot of iOS developers who make applications geared for a younger audience.

For most of these free apps, iAds is their only source of revenue. MacStories reported on an email sent in by Dex creator Mike Zomek, and the following response from Apple’s iAd Network Support:

“Last Thursday I had a particularly awful iAd fill rate of 5%. This isn’t new, I’ve had problems before. Then on Friday a 0% fill rate, then on Saturday another 0% fill rate.”

The developer finally emailed the iAd support team and got this as a response:

“Hello Michael, we periodically review the apps in the iAd Network to ensure that all apps receiving ads are aligned with the needs of our advertisers. Currently, our advertisers prefer that their advertising not appear in applications that are targeted for users that are young children, since their products are not targeted at that audience. We appreciate your understanding.”

MacStories reports that they have received word from other developers, who are looking to switch to Google’s AdMob due to low fill rates. While Apple should have given a heads up to developers who depend on the income from iAds, it makes sense to remove advertisements from kid’s apps.

Imagine how many times the ads were randomly tapped by kids. This would result in high ‘click rates’ with nothing to show for it. We’ll see how developers respond over the next few months.