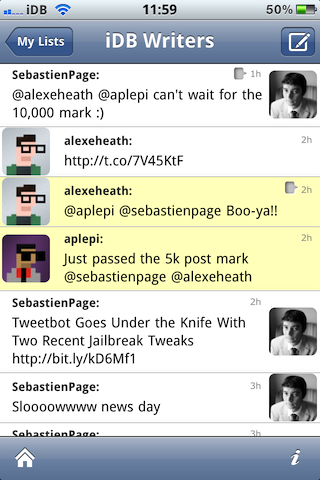 A few weeks ago a new Twitter app was released with much noise around it: TweetBot. It was so popular that I decided to give it a try, thinking it might even replace my current favorite Twitter app. It didn’t. TweetBot is too much for me. It’s too busy and overdesigned.

After spending a week forcing myself to use TweetBot, I went back to my good ol’ favorite: SimplyTweet…

I was given a promo code by the developer over a year ago, but it obviously doesn’t influence the tone of this post at all.

When Alex published his great review of TweetBot, I commented on it saying that no matter what, SimplyTweet was still my favorite. Then Jeff asked me why I liked SimplyTweet so much. This is what I replied:

A few things I love about SimplyTweet:
– it’s fast
– it’s simple
– TwitLonger integration (I don’t know if TweetBot has that or not)
– Gives option for RT style (ie RT @… or via @…)
– 3 customizable buttons
– customizable navigation icons layout
– a default email recipient for emailing tweets (which is great because I email myself tweets all the time)
– ability to reply to several users at the same time

SimplyTweet has tons more features (see the App Store description) but these few are the most important one to me in an iPhone app.

If like me, you don’t care much about the looks of an app but rather how it performs, then give a chance to SimplyTweet. I’ll admit that the $4.99 pricetag might turn a few potential buyers off, but believe me, you won’t regret it.