When Apple unveiled their multitasking bar in iOS 4.0, they were fairly late to the party. As with multiple features, the jailbreak scene had already had multitasking apps like Backgrounder out for a while. Although it was belated, a lot of people really took a liking to Apple’s new multitasking support.

Then there are people like me, who are constantly searching for a better alternative for switching between applications. Sure, there are apps like Stacks and Dock that make multitasking easier, but is there anything else available?

Enter Physwitch, the Cydia tweak that allows you to cycle through your current open applications with your volume up and down keys. Typically I am a fan of mapping functions to physical buttons, so I was excited to try this particular extension out.

Once again, it has the typical tweak characteristics. There is no home screen icon, and there actually isn’t even a separate Settings tab for it. Once downloaded from Cydia, you can pop into your Settings, and under the Activator tab, select the Anywhere option. 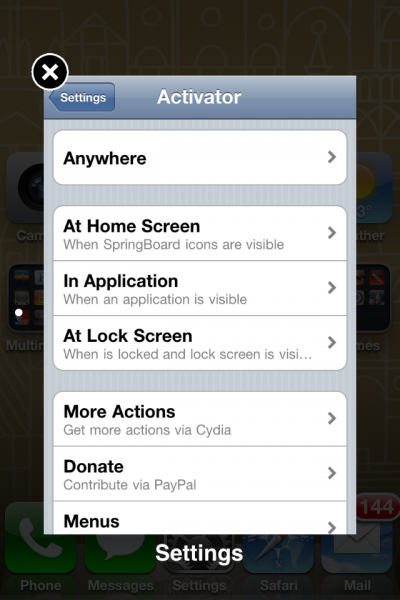 Once there, just scroll through and select the option that you want to use to activate Physwitch. The default setting is that pressing both volume buttons at the same time will activate the multitasking tweak, but you can certainly change it. Maybe folks with large thumbs might find the dual-volume-button-press convenient, but I didn’t.

You’ll certainly have to play with Activator and find the best way for you to trigger Physwitch, but outside of that, the tweak is clean cut. Your different apps show up as large screen shots. You can scroll through them by flicking up or down, or using the volume buttons. Bouncing in and of apps is fairly smooth, and I haven’t noticed any stability issues yet.

Still on the fence? Check out this video demonstration of Physwitch in action:

If you haven’t had the chance to try it out, Physwitch is available from the BigBoss repo in Cydia (Icy doesn’t have a payment method yet). The download will cost you $1.99, but considering all the different ways you can initiate the tweak, it might be worth the money.

Have you tried Physwitch? Which app do you use for multitasking?