That’s right folks, the silky smooth Cydia alternative is back up and running. For folks who have been around the jailbreak scene for a while, you undoubtedly remember Icy. The dpkg installer worked similar to Cydia, but always seemed faster and more refined than its counterpart.

Since Cydia and Rock joined forces, there really hasn’t been any competition in the jailbroken app store industry. Icy is looking to change that by returning to the scene with a fresh coat of paint. Does it have what it takes to be a worthy challenger after being gone for so long?

If it continues to perform as well as the beta version does, I think Icy could certainly give Cydia a run for its money. The entire application feels lighter, quicker, and has a much more user-friendly interface. Sometimes with Cydia you could almost get lost in the menu system, but with Icy, that’s just not the case.

The new app store is being developed and maintained by Infini-Dev, and it seems like they’re pretty confident in their product:

“Icy installer was made by RipDev back in the 3.x times. It’s proved to be 5 times faster than Cydia 1.0. You can theme icy, icy can run in landscape, all working sources are set as default, there are no errors like “failed to fetch” Icy runs in your language, it is still faster then Cydia 1.1.1. and a lot more…”

Other than differences in speediness and design, Icy functions a lot like Cydia does. You can add sources, view recently added packages, and search for almost anything. Essentially it’s just a different portal to the jailbreak community, as it supports all working repositories (except for pirated ones). 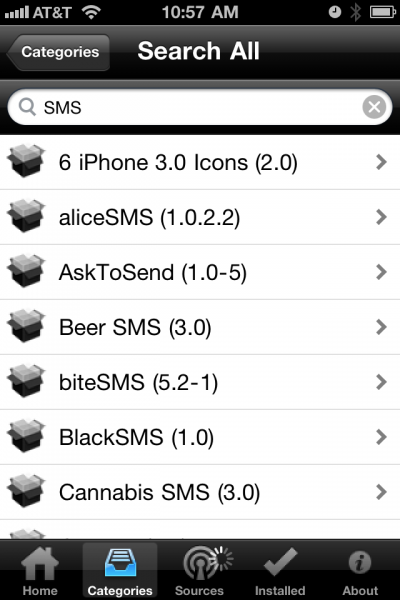 To be fair, Icy is still in beta testing and may not seem so quick and nimble with a 100,000 users poking around. I’ve also noticed that there isn’t any advertisements hanging in Icy just yet, which could also change as the app installer matures.

For folks interested in trying out the new Icy, just add repo.ispazio.net to your Cydia sources and search for it. The new jailbroken app installer has already crossed 15,000 downloads. Infini-Dev says that they are also looking to offer Icy as an install option in future jailbreak software (like RedSn0w and PwnageTool).

What do you think? Can Icy and Cydia both exist, or will one ultimately prevail?