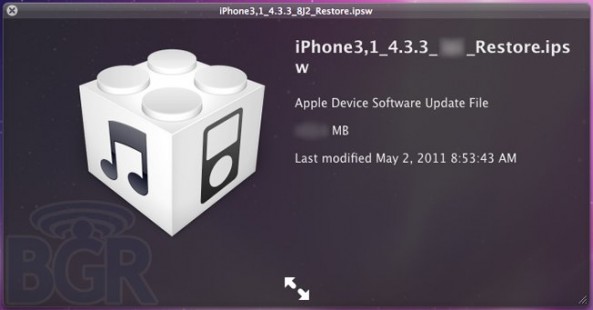 Apple will be pushing an update to iOS in the next couple weeks that reportedly addresses the location tracking “bug” that has stormed the media. The iPhone’s location database retained too much tracking info, and Apple plans on fixing that issue in iOS 4.3.3.

A few minor bugs will be addressed, but iOS 4.3.3 looks like it will mainly focus on the iPhone’s location database.

Boy Genius Report has been told that iOS 4.3.3 will address,

If you recall, Apple addressed what it would fix in an iOS update during the company’s Q&A on the location issue.

Sometime in the next few weeks Apple will release a free iOS software update that:

We saw 4.3.3 coming when there was such a strong response to the uncovering of the iPhone’s location database. Although it honestly seems like a non-issue, it’s nice to see that Apple is being responsive in fixing this “bug” with a quick update.

iOS 4.3.3 seems to be a minor update, so hopefully ic0n1c’s untethered exploit will remain unpatched for jailbreakers. Apple has grown more aggressive with patching exploits as of late, so only time will tell.

As always, stay tuned to iDB for the latest news as more is uncovered about iOS 4.3.3.