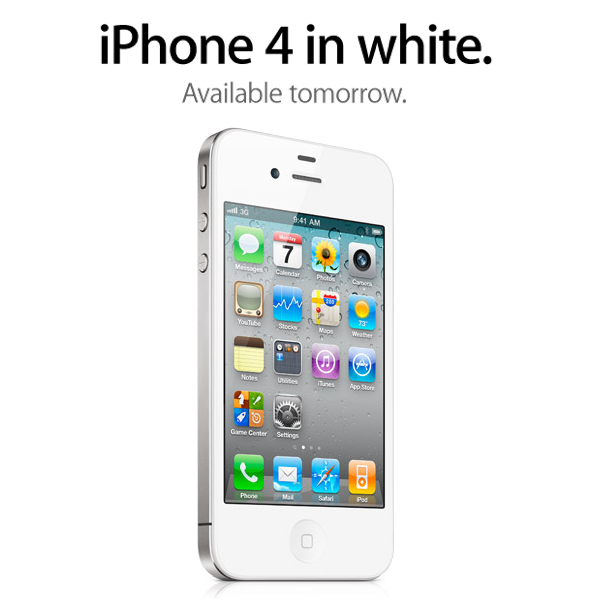 It’s finally coming! Apple has officially confirmed the long-awaited white iPhone 4. The mythical device will be available, April 28, on both AT&T and Verzion and in 28 countries.

Pricing is exactly the same as the black iPhone 4 with a two year contract. The device will be available in a 16GB and 32GB model.

Press release after the break!

“The white iPhone 4 has finally arrived and it’s beautiful,” said Philip Schiller, Apple’s senior vice president of Worldwide Product Marketing. “We appreciate everyone who has waited patiently while we’ve worked to get every detail right.”

White models of iPhone 4 will be available in Austria, Australia, Belgium, Canada, China, Czech Republic, Denmark, Finland, France, Germany, Hong Kong, Ireland, Italy, Japan, Luxembourg, Macau, Netherlands, New Zealand, Norway, Singapore, South Korea, Spain, Switzerland, Sweden, Taiwan, Thailand, UK and the US, beginning Thursday, April 28 and in many more countries around the world soon. White iPhone 4 will be available for a suggested retail price of $199 (US) for the 16GB model and $299 (US) for the 32GB model with a new two year agreement through the Apple Store® (www.apple.com), at Apple’s retail stores, AT&T and Verizon Wireless stores and select Apple Authorized Resellers.

Long live the white iPhone! Who will be picking one up tomorrow?