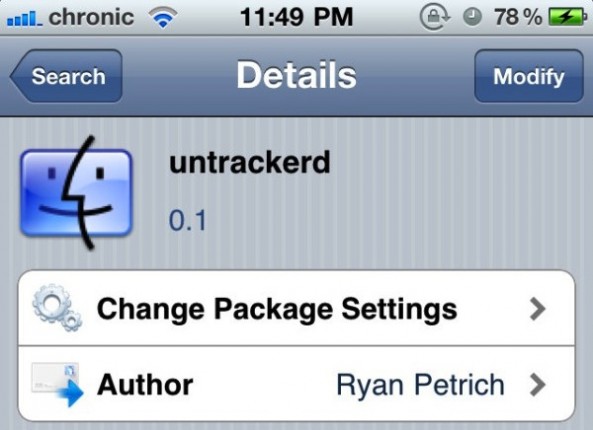 Ryan Petrich has released a new jailbreak utility in Cydia called untrackerd. This utility blocks iOS from saving the secretly logged location data that the iPhone stores in a system file.

In case you didn’t know, some researchers recently discovered that the iPhone records and saves your location coordinates without your permission. The location data is then stored to a system-level file that is then copied over to iTunes on sync.

Less than 24 hours after this discovery, famed jailbreak developer, Ryan Petrich, released a free Cydia utility to combat Apple’s logging of your iPhone’s coordinates. Although it’s unclear as to how these saved coordinates can be used by carriers or Apple, anyone with the right tools is able to view exactly where your iPhone has been.

“Continuously clean up locationd’s history data in the background

This package installs a daemon (process that can run in the background) to clean consolidated.db file. No new icons are added to your homescreen. There are no options to configure.”

This utility is another example of the reactive power that the jailbreak community offers. A big thanks to Ryan and the other devs for continuing to give us control over our own device’s.

To install untrackerd, just look for it in Cydia.