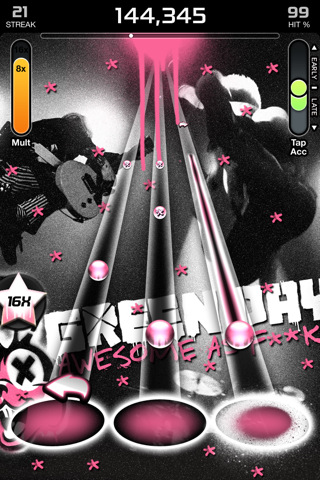 Green Day Revenge [iTunes Link] was created by Tapulous, the amazing developers behind the popular Tap Tap franchise. This series has earned a massive following and has catapulted the music rhythm genre into popularity while spawning many clones in the process.

Banking on that popularity, Tapulous created a few spin-offs such as Kings of Leon Revenge, Katy Perry Revenge and my favorite, and Justin Bieber’s Revenge. But no need to worry, I’m cured of “Bieber Fever,” so today I’m just going to focus on Green Day Revenge…

Green Day fans will love this app. All your favorite songs and hits such as Good Riddance, Basket Case, Welcome to Paradise and more (up to 10 full songs for free) will be available at your fingertips. In addition, Fans will be treated with loads of Green Day images that perfectly complement the music. If you’re not a Green Day fanboy, I suggest going with the free Tap Tap Revenge version because Green Day Revenge is all about Green Day.

As with all of the Tap Tap Revenge games, the controls are, well. taps. For those of you who aren’t familiar with these type of games, let me explain it to you in a nutshell. You will tap on the circles as the notes reach the bottom, and that’s about it.

I don’t know about you all, but if you’re going to fork over $4.99 for an app that has a decent free version, you most likely would expect that you would be getting something extra. But indeed that’s not the case. Green Day Revenge feels like Tap Tap Revenge with a new skin and playlist.

Overall the Revenge series is perfect for fans of that particular group. Anything less and you might be feeling a little short changed. However, the pictures are great and the animation is smooth and looks fantastic on the retina display. Also, the songs are uncensored, which is always a plus in my book.

Have you had a chance to play Green Day Revenge? How do you like it?