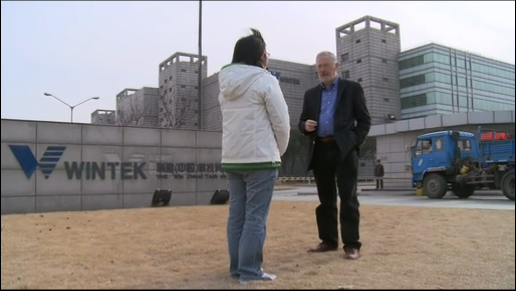 We told you last year about the workers in Suzhou, China suffering from health problems due to toxic chemicals. The employees were poisoned in 2009 using a hazardous chemical to clean iPhone LCD screens.

Their employer is a subsidiary of Wintek corporation and is the number one producer of small to medium sized LCD screens in the world. Although Apple has since released information that the workers have fully recovered, a special report by PBS Newshour scheduled to air tonight tells a different story…

Special correspondent Jeffrey Kaye sits down with a few of the workers who say they were poisoned making iPhones. The interview comes from a dormitory for Wintek factory employees, and tells the tale of how their lives have been since the initial reports of their poisoning.

For those that don’t recall, the factory workers became extremely ill due to exposure to a toxic chemical known as n-hexane. The chemical is made from crude oil and studies from around the globe have found that it causes neurological damage ranging from dizziness to paralysis.

One worker describes the manufacturing process that left her nearly paralyzed:

“I used my left hand to hold the iPhone screen when it came down the work line. And with my right hand, I used a cotton cloth dipped in hexane to wipe the screen.”

The men and woman go on to explain that they didn’t realize they were sick at first, but they started finding it difficult to make it up the stairs or even walk. One man claimed he was in the hospital from November 2009 until July 2010.

Wintek employees went public about their illnesses in 2010. Last may Wintek announced it had discontinued n-hexane and provided medical treatment and compensation to the affected workers. Apple verified the company’s statements in a supplier responsibility progress report:

“We learned that 137 workers at the Suzhou facility of Wintek, one of Apple’s suppliers, had suffered adverse health effects following exposure to n-hexane. Apple has verified that all affected workers have been treated successfully, and we continue to monitor their medical reports until full recuperation.”

The men and woman in the interview seem to think differently. A man describes to the reporter a frustrating dispute between the hospital and his company. The hospital believes he needs further treatment, while his company says he’s fine. Several of them claim to still be experiencing symptoms of the poisoning.

When asked why they all continue to work for Wintek, the consensus seems to be that they are afraid. They worry if they leave the factory and their health continues to deteriorate, no one will be responsible for them.

You can watch a summary of tonight’s interview here.

Apple has agreed to better police its suppliers, but is it really their job?