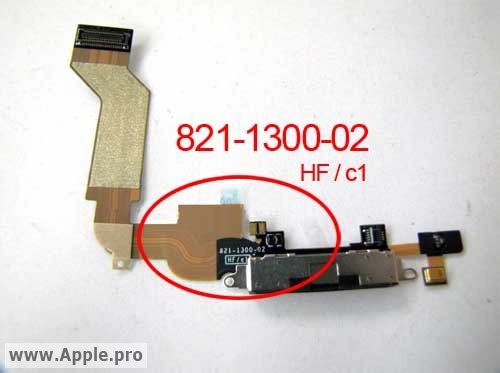 Taiwanese website Apple.pro has allegedly leaked the dock connector and cable of Apple’s next iPhone. If the images are true, not much has changed from the current dock setup.

There have been rumors that Apple will change the connection architecture of the next iPhone to something like MagSafe. But, according to Apple.pro (which is usually very reliable with Apple supply chain rumors), the same 30-pin connector that we all know and love will remain in the iPhone 5.

“The part is nearly identical to the corresponding part found in the current iPhone, with the main exception of a slightly narrower connector and cable where the part connects to the device’s main board. The connector carries a part number of 821-1300-02, compared to 821-1281-A for the Verizon iPhone and 821-1093-A for the original iPhone 4.”

So, rumors claiming a major redesign of the iPhone 5’s connector have been debunked. Apple will stick with its current standard and possibility shift to a new architecture in the coming years.

It is worth noting that Apple (if these images are authentic) has ignored the European Commission’s new USB charge standard.

“The European Commission recently implemented a micro-USB universal charger standard, leading to some speculation that Apple would have to include such a port in addition to or instead of the existing dock connector, but Apple can meet the new requirements by simply including a dock connector to micro-USB adapter.”

“The report claims Apple has built a new iPhone model with a “sliding cover.” It notes that the alleged device has a “frame shape” similar to the current iPhone 4, though the device is “slightly thicker” than the current-generation iPhone.

As far as a slide-out keyboard is concerned, this report seems quite vague. Apple.pro also claims that the leaked iPhone 5 bezel from this past weekend was a fake.

It is worth mentioning that the report also references a 3D screen. So, take what you read with a grain of salt.

Apple may tease a preview of the iPhone 5 at its iPad event this Wednesday, but the odds are slim. We’ll most likely have to wait till WWDC this June to actually see anything concrete about the device.