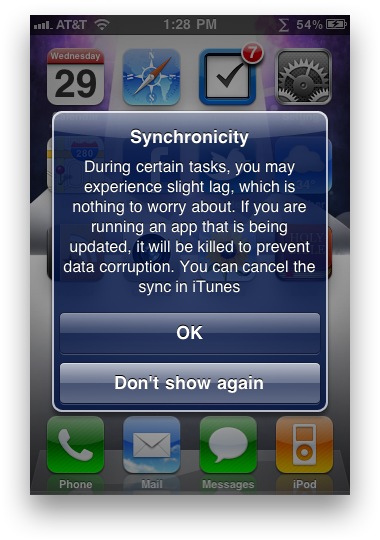 Synchronicity is a popular jailbreak mod that allows you to use your iPhone while it’s syncing with iTunes. Instead of being stuck with a lock screen while your iPhone is syncing with your computer, Synchronicity allows you to run apps, make calls, etc. Basically anything is fair game, except for the iPod app (to prevent data corruption with iTunes).

This mod has been a favorite of ours since it was released back in August; it even made it pretty far up our “Top 10 Jailbreak Apps for 2010“ list. ﻿If you don’t have Synchronicity, you should.

Synchronicity was recently updated to 2.0 status. The mod was already super lightweight and unobtrusive, but 2.0 makes it even better with a design tweak and some enhancements…

Previously, Synchronicity would display as a red, tethering-style bar over the iPhone’s status bar. This notified that a sync with iTunes was occurring, and removed that annoying “Sync in Progress” lock screen we all normally have to stare at while our iPhone syncs. In Synchronicity 2.0, that red tethering bar is replaced by a minimal, Greek “Sigma” icon in the status bar to indicate that an iTunes sync is occurring.

Performance speed has also been increased significantly, along with numerous bug issues. There is also added language support.

Overall, Synchronicity 2.0 is a very nice improvement on an already great jailbreak mod. Hopefully, in the near future, Apple will develop this type of syncing natively into iOS and iTunes. Synchronicity is proof that it can be done, and done well.

You can pick up Synchronicity 2.0 for $2 in the Cydia Store.

I’m glad that Synchronicity 2.0 got rid of that red status bar. The new sigma icon will appear as red when apps are opened, but it remains white on the home screen.

What do you think about Synchronicity 2.0? Do you use this helpful mod?