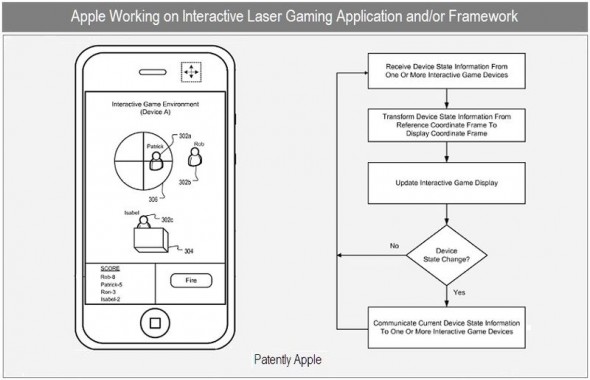 Apple has filed another interesting patent detailing some extremely interesting multi-player gaming possibilities. Patently Apple has referred to the patent as an “Interactive Laser Gaming Application and/or Framework.” Essentially, the new framework would allow iPhones to recreate what amounts to a game of laser tag.

Most people are familiar with laser tag, a game in which players wear light-sensitive vests that register a “hit” when shot by an infrared laser from another player’s gun. This new Apple patent describes a similar environment, in which the iPhone would act as the vest and gun…

Just in case you weren’t able to understand all of that jargon, this patent basically means we’ll all be playing “iWars” with our iPhones in no time. Patently Apple describes how this patent would be used in the specific case of laser tag,

I wouldn’t put it past Apple to design their own iPhone game around this concept. They have designed a game before (Texas Hold’em).

With the introduction of the Game Center in September, it is clear that Apple is getting serious about the world of mobile, multi-player gaming. An advanced, easy to use game that is like laser tag could be a big hit with the younger demographic of iOS users. Who knows, maybe adults would use it too.

If you would like a much more in-depth look at this patent, I suggest you read the Patently Apple article.

What about you? Could you see yourself running around and playing laser tag on your iPhone?