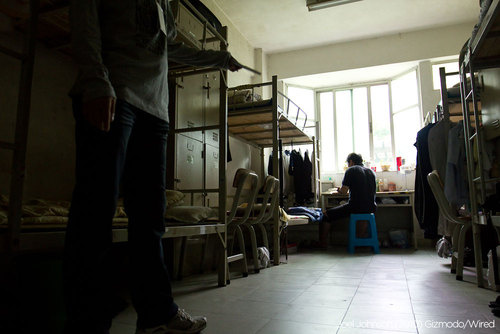 Consumers rarely have the opportunity to see what life is like for the people that work in large factories around the world. However, some light has been shed as of late on what life is like behind the smoke stacks of certain industrial giants.

Foxconn, the manufacturer that Apple contracts to make iPhones, has been under the microscope lately over employee suicides. Recently, Gizmodo got an exclusive look at Foxconn’s factory in Shenzhen, China. The article focuses on the living conditions for the 420,000 workers… 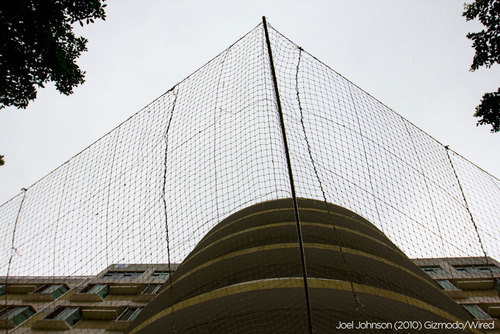 Men and women have separate dormitories on the 2.1-square-kilometer campus. After a series of over eleven suicides earlier this year, giant nets have been installed around all of the buildings. Although the look is eerie, it seems to have worked. The Gizmodo article reports that there have been no suicides since the nets were installed in May.

The dorm rooms are described as snug, to say the least. Gizmodo reports, “Eight workers sleep in four bunk beds in a room about the size of a two-car garage.” There is a small television viewing room on each floor. Workout equipment exists outdoors between the buildings. The workout equipment looks to resemble old playground equipment. 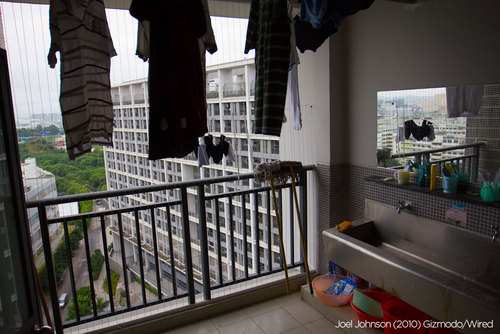 Gizmodo did share that Foxconn has started outsourcing the maintenance of their living operations to a local company. Perhaps Foxconn removing itself from managing the living conditions of its employees will result in a better environment for its 420,000 workers.

What do you think about how Foxconn treats its employees? Does it bother you that Apple is working with a company that has such a scandalous track record?