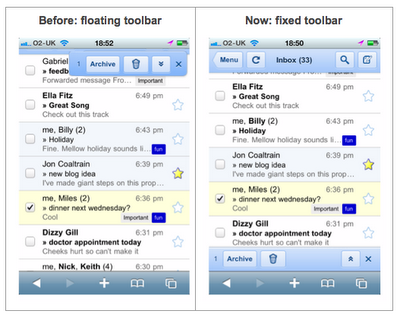 I can’t say that I use Gmail in mobile Safari too often, considering that the native Mail App has great support for Gmail, but there must be some of you crazy folks out there that still do.

Fret not, Google has heard your cries for an improved mobile Safari experience, they’ve seen your tears, and they’ve felt your pain. As a result, an updated version of Gmail for mobile Safari is now live at last.

What new features can you expect to see? Well, too be honest, they’re more on the aesthetics side of the house, meaning they don’t add much in the way new functionality. Check inside for the details on not one, but two new improvements for Gmail on mobile Safari…

One thing I’ve always despised about Gmail for mobile Safari was the dreaded floating tool bar. It felt like you were browsing back in 2002 all over again, or something, with that annoying little thing following your every move.

Thankfully, Google has axed the floating toolbar for a more professional looking static bar, which is still visible wherever you are, it’s just permanently integrated into the UI.

The second feature that Google has implemented is improved scrolling functionality. I can’t pretend to have used Gmail on mobile Safari long enough to notice a difference, but hey, I’ll take their word for it.

What do you think about these latest improvements to Gmail on mobile Safari? Also, if you’re still using Safari to access your Gmail in the first place, please tell us why, I’d honestly like to know your reasoning behind this.