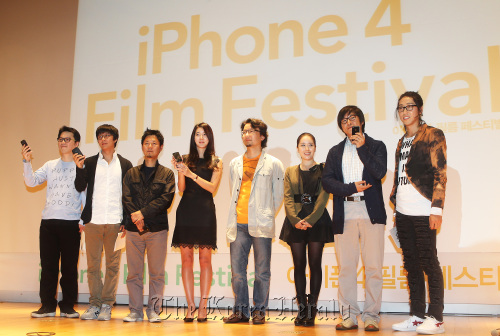 You knew this was bound to happen sooner rather than later, though you probably didn’t expect the first iPhone 4 Film Festival to come from Korea. To commemorate the recent launch of the iPhone 4 in South Korea, local carrier KT decided to create the very first festival that requires all competitors to film and edit their entries exclusively with an iPhone 4.

Twelve shorts by Korean directors were screened yesterday night for the opening day of this month-long event. Apparently not everybody was pleased by the capabilities of the iPhone 4…

Writer-director of “The Scam” Lee Ho-jae told the press that he had difficulties with setting the white balance and anticipating unpredictable focus shifts of the phone’s lens.

“There were problems with setting the white balance and getting the auto-focus to keep steady and consistent but that was taken care of by an application called Almost DSLR, Lee said.