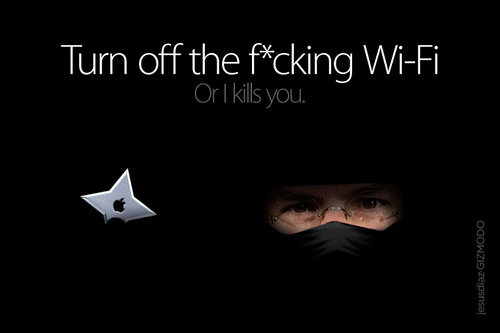 Airports give us our funniest stories. People hauling every piece of garbage they own across the country with them often results in some hilarious revelations. Enter, Steve Jobs.

Gizmodo has a brief from a Bloomberg outlet that says that while Steve Jobs was getting his luggage at Kansai International Airport in Japan this July, security officials were forced to apprehend Jobs momentarily for having ninja throwing stars in his bags. It didn’t stop there…

Jobs was apparently fired up about the matter which happened in relation to the CEO’s private jet. Bloomberg had just this to offer:

Jobs said it wouldn’t make sense for a person to try to hijack his own plane, according to the report. He then told officials he would never visit Japan again, the magazine reported.

Apple had no official comment to offer which leaves the door open for us to speculate. Thoughts?

“Steve did visit Japan this summer for a vacation in Kyoto, but the incidents described at the airport are pure fiction. Steve had a great time and hopes to visit Japan again soon.”