During its March 8 special event under the tagline “Peek Performance,” Apple announced a new 27-inch 5K external monitor for the rest of us, dubbed Studio Display. Similar to the discontinued Thunderbolt Display, Studio Display provides a plethora of ports and smarts thanks to the integrated Apple A13 Bionic chip making it the ideal docking station for your Mac. In this post, we’re going to answer your frequently asked questions about the new Studio Display. 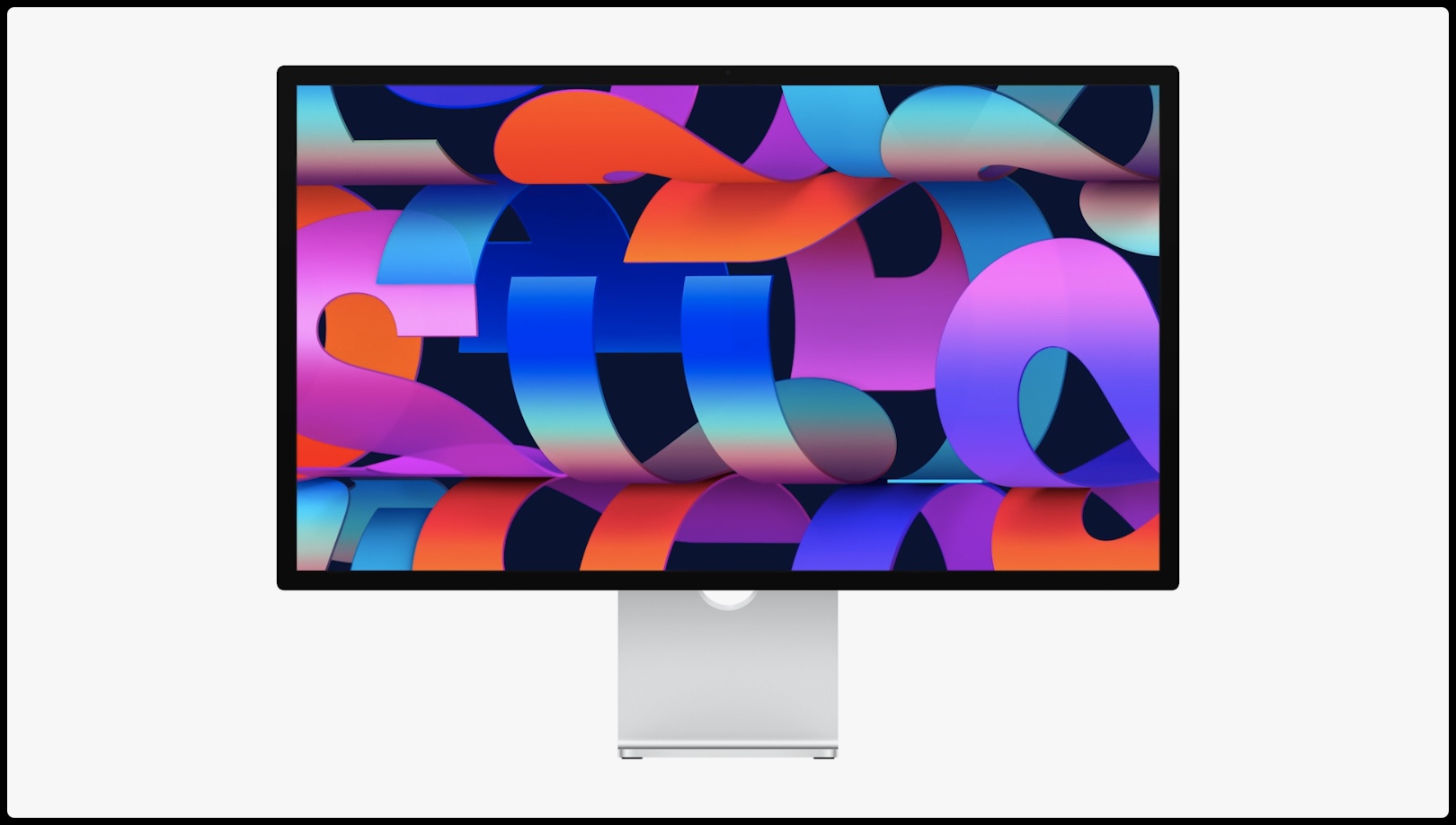 What’s in the Studio Display box?

Your shipment includes a Studio Display with either a stand or a mount adapter (depending on your choice) along with a one-meter Thunderbolt cable to connect the monitor to your Mac. Apple also offers a 1.8-meter Thunderbolt 4 Pro cable for $129 and a three-meter one for $159.

What’s the size of the Studio Display panel?

What’s the resolution of the Studio Display screen?

Does Apple classify Studio Display as a Retina screen?

Yes, Studio Display is a 5K Retina screen with a pixel density of 218 pixels per inch.

How much does Studio Display weigh?

Here are your answers:

What features does Studio Display support?

Does Studio Display have mini-LED?

Does Studio Display use an OLED panel?

Does Studio Display work with PCs?

Yes, but with certain limitations. While Studio Display acts as a standard USB/Thunderbolt monitor in Windows, features that require macOS, such as Center Stage and True Tone, are not supported on PCs. According to Apple’s website, the Studio Display resolution may vary from one computer to another.

What ports does Studio Display provide?

Studio Display has the following ports on its back, from left to right:

The included Thunderbolt cable plugs into your Mac and the Thunderbolt 3 port on the back of your Studio Display. This makes any connected peripherals available to your Mac via a single cable. The Thunderbolt 3 port supports 96W charging with USB Power Delivery. That’s enough power to charge any Mac notebook or fast-charge a 14-inch MacBook Pro. The three USB-C ports (up to 10Gb/s each) can be used for connecting peripherals, storage and networking.

What are the specifications of the integrated web camera?

Studio Display has an integrated camera that works with the A13 Bionic chip to enhance images and video calls with computational photography. The sensor has an aperture of ƒ/2.4 and a resolution of twelve megapixels.

Yes. Because the built-in camera in your Studio Display has a wide 122-degree field of view, it supports Apple’s Center Stage feature. Available during video calls on FaceTime and compatibles apps such as Zoom and WebEx, Center Stage uses AI-assisted cropping and zooming to automatically keep everyone in the frame.

Yes, Studio Display uses the A13 Bionic chip to analyze multi-channel audio and distribute it across four force-canceling woofers and a pair of tweeters. The setup creates wide stereo sound with automatic support for spatial audio when playing music or video with Dolby Atmos.

Yes, Studio Display lets you invoke Siri hands-free. The A13 Bionic chip powering the display analyzes data coming from three microphones (which sport a high signal-to-noise ratio and use directional beam-forming to better focus on your voice).

Does Studio Display support up to 120Hz ProMotion refresh rates?

No. Studio Display uses a fixed refresh rate of 60Hz. With ProMotion, devices like the iPhone 13 Pro can dynamically adjust the refresh rate based on onscreen movement, ranging from as low as 10Hz and going all the way up to 120Hz.

Is Studio Display compatible with iPads?

Studio Display won’t work with your iPad Air 4 or iPad mini 6 even though both those tablets and the display itself use USB-C/Thunderbolt. The reason for that is data throughput. Both iPad Air 4 and iPad mini 6 use USB-C with 5Gbps throughput (USB 3.1 Gen 1) which is limited to a 4K display at 30Hz (Studio Display is a 5K display that uses twice the refresh rate). By comparison, the iPad Pro models compatible with Studio Display feature USB-C with 10Gbps throughput (USB 2.1 Gen 2) while the latest iPad Air 5 also provides 10Gbps throughout via its USB 3.1 Gen 2 connector.

Does Studio Display include a stand?

Studio Display comes with your choice of two stands or a VESA mount adapter. The default tilt-adjustable stand provides five degrees of downward tilt and 25 degrees of upward tilt for a total of 30 degrees of tilt.

No, Studio Display stands are not interchangeable. Because each stand or VESA mount adapter is built in, Apple advises you to consider your workspace needs at the time of purchase.

How much does Studio Display cost?

Apple has priced Studio Display at $1,599 in the United States, and $1,499 for US education customers. $1,599 is the base price you pay for the standard version of the product with no upgrades that jack the price up to as high as $2,229. Retail availability is starting beginning Friday, March 18, 2022.

Does the Studio Display box include a polishing cloth?

Apple’s legendary polishing cloth is not included when you choose the standard glass option. To get a free polishing cloth, you’ll need to choose a pricier nano-texture glass version.

Are there any upgrades available for Studio Display?

After adding your Studio Display to the shopping basket on apple.com, the online store will let you optionally pick a nano-texture glass, a tilt- and height-adjustable stand or a VESA mount adapter.

Should I pick standard glass or nano-texture glass?

Nano-texture glass is a great option if you’re in a workspace with bright light sources, like a lot of sunlight. Typical matte displays have a coating added to their surface that scatters light. However, these coatings lower contrast while producing unwanted haze and sparkle. Etched into the glass at the nanometer level, the nano-texture scatters light to further minimize glare—for outstanding image quality even in challenging lighting conditions.

How much is nano-texture glass?

Apple will charge you an additional $300 when you upgrade from standard glass to nano-texture glass when configuring your purchase on apple.com for a total of $1,899. Apple says that standard glass has an industry-leading anti-reflective coating which enables “incredibly low reflectivity for better comfort and readability”.

How much for a tilt- and height-adjustable stand?

Upgrading your Studio Display from the default tilt-adjustable stand to a tilt- and height-adjustable one will set you back an additional $400 at the time of purchase for a total of $1,999. The tilt- and height0-adjustable stand is equipped with a counterbalancing arm that allows for 30 degrees of tilt as well as 105 mm of height adjustment. Apple claims it makes the display “feel weightless as you adjust it.” This upgrade is somewhat similar to the stand that’s available for the Pro Display XDR although the Studio Display version is $700 cheaper.

How much is a VESA mount adapter?

How does the VESA mount adapter work?

The VESA mount adapter lets you attach your Studio Display to any VESA-compatible 100×100 mm wall mount, desk mount, stand or articulating arm. The mount or arm must support the weight of the Studio Display (12.1 pounds or 5.5 kg).

Is AppleCare available for Studio Display?

Yes, Studio Display can be optionally covered with AppleCare+ for Apple Displays. Every Apple display comes with a one-year limited warranty and up to 90 days of complimentary technical support. AppleCare+ for Apple Displays extends your coverage from the purchase date whilst adding two incidents of accidental damage protection every 12 months. Each incident is subject to a service fee of $99 for screen damage or external enclosure damage, or $299 for other accidental damage.