When listening to songs in the Apple Music app, you might sometimes feel inclined to use the Up Next feature to queue another song that will begin playing after the one that’s already playing.

As you do this, the app displays a pop-up, and some users feel that said pop-up gets in the way. That’s why iOS developer ETHN created a free jailbreak tweak called MusicQueueBeGone.

For reference, we’ve included a screenshot above of the pop-up that MusicQueueBeGone removes. Queuing music will still work the same way it did before, but without the added flair of pop-ups getting in the way. On the other hand, you can configure various sound and vibration settings instead.

Once installed, MusicQueueBeGone adds a dedicated preference pane to the Settings app where users may configure a few options: 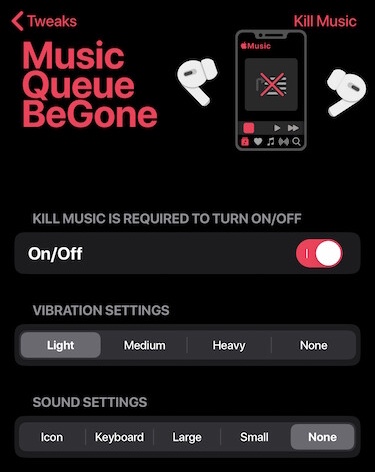 Since pop-ups can be somewhat intrusive at times, it’s nice to see an alternative that users haptic feedback and subtle sounds for queuing upcoming songs instead.

Those interested in trying MusicQueuBeGone can download the tweak for free from the brand-new Havoc repository via their favorite package manager app. Please note that the tweak supports jailbroken iOS & iPadOS 10, 11, 12, 13, and 14 devices.

If you’re not already using the Havoc repository, then you can add it to your package manager app by using the URL that we’ve provided below:

Do you think you’ll be taking advantage of MusicQueueBeGone, or do you use a totally different music streaming service? Let us know in the comments section down below.